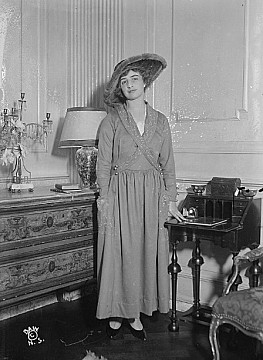 She was born at Mirador, her maternal grandfather's mansion that she eventually inherited and transformed into a beautiful example of the best taste in Gilded Age country house interior design. She was named for her aunt, the hugely influential Nancy Astor who was the first woman to sit in the British House of Commons. In 1944, she purchased the English fabric designers Colefax & Fowler that became known for making the English country-house look fashionable. She become an arbiter of taste and style. She created a list of 7-design rules for interior decoration, first and foremost being that a house should never look as if its been "decorated". She was greatly inspired by many of the old Virginian plantation homes, notably the Westover Plantation: "When I was a child, Virginian houses were still occupied by the descendants of the people who built them in the 18th century. Many of them were ramshackle and their gardens were completely overgrown; that was their beauty, that was their charm. They had once been very grand, but the war and agricultural depression changed all that. Things were shabby, not shabby from poverty, shabby from use... You get the same sense in some English houses... It was the most romantic thing in the world to me."

In 1917, she married her first husband, Henry Field, a grandson of Chicago's infamous department store owner Marshall Field, but he died in the same year they were married. In 1920, she married her first husband's English first cousin, Ronnie Tree M.P., another grandson of Marshall Field. They were the parents of three sons but divorced in 1947. In the following year, she married another Englishman, Col. Claude Granville Lancaster M.P., from whom she and Ronnie had rented Kelmarsh Hall, Leicestershire.

Nancy Lancaster: Her Life, Her World, Her Art By Robert Becker