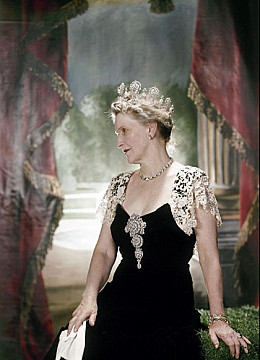 Descended from the First Families of Virginia, her paternal ancestor had acquired a land patent there in 1666, entered politics, and set the tone for proceeding generations. The family's fortunes were brought to an abrupt end after the Civil War when their slaves were liberated and their plantations turned to ruin. In poverty, Nancy's father moved the family into the Langhorne House at Danville until success in business enabled him to buy Mirador when Nancy was thirteen. She attended finishing school in New York where she met her first husband to whom she was married in 1897. It was a bad match and they divorced six years later. Having become enamored with England after a visit, her father encouraged her to settle there. She and her sister, Phyllis, did so in 1905. An English woman asked tersely, "I suppose you have come to get our husbands?" Nancy replied, "if you knew the trouble I had getting rid of mine you would know I don't want yours"! Her intelligence and sharp wit quickly made her a society sensation.

In 1906, Nancy married the American-born Waldorf Astor whose father gifted them Cliveden as a wedding present. Waldorf's promising career as a Member of Parliament ended when he (unwillingly) succeeded to his father's title and was forced to take his place in the House of Lords. Nancy had not been connected to the women's suffrage movement but she was an outspoken feminist: "I wanted the world to get better and I knew that it couldn’t get better if it was going to be ruled by men... women have got to make the world safe for men since men have made it so darned unsafe for women"! In 1919, she contested her husband's vacant seat (Plymouth Sutton) as a Conservative and won, becoming the first female Member of Parliament to sit in the British House of Commons. She said: "the penalty for success is to be bored by the people who used to snub you"! She was re-elected continuously until 1945 when she was persuaded by those close to her to step down.
Her strong character and merciless tongue divided opinions among all she met, even saying of herself: "My vigour, vitality, and cheek repel me. I am the kind of woman I would run from"! She famously held a lifelong feud with Winston Churchill, also the son of an American, with whom they traded many famous alleged insults: "Sir, if you were my husband, I'd poison your tea" to which Churchill is said to have replied, "Madam, if you were my wife, I'd drink it"! Churchill admitted that when she entered the House of Commons it felt as though a woman had just walked in on him in the bathroom, to which Nancy shot back, "you're not handsome enough to have such fears"! After retiring from politics her sharp personality put a strain on her relationship with both her husband (exacerbated by the fact that in later life he espoused left-wing politics!) and her children.

She always remained a proud Virginian and frequently returned there, notably to Mirador which from 1920 to 1950 was the home of her well-known niece, Nancy Lancaster, the interior designer and owner of the fabric designers Colefax & Fowler. Lady Astor's grandson, William, 4th Viscount Astor, is the stepfather of Samantha Cameron, wife of the former British Prime Minister, David Cameron. Samantha's mother, Annabel, is the stepdaughter of Lady Astor's fourth son, Michael Langhorne Astor (1916-1980). Nancy died at her daughter's home in Lincolnshire, Grimsthorpe Castle.

Nancy: The Story of Lady Astor By Adrian Fort

Rose: My Life in Service to Lady Astor By Rosina Harrison

Five Sisters: The Langhornes of Virginia By James Fox

The Mistresses of Cliveden: Three Centuries of Scandal, Power, and Intrigue in an English Stately Home By Natalie Livingstone