Built circa 1750, for William Evelyn Byrd III (1728-1777) and his first wife Elizabeth Hill Carter (1731-1760), of the nearby Shirley Plantation. Westover is located on the James River, six miles west of Charles City. During the French and Indian War, Major-General Francois-Jean de Beauvoir (1734-1788), Marquis de Chastellux, stayed as a guest at Westover and described it as the most beautiful place in America. Barely changed from that era, it is today considered to be among America’s finest examples of colonial Georgian architecture. It is particularly noted for its elegant 18th century gates, the secret passages and magnificent gardens that are open to the public. Westover served as a direct inspiration to the celebrated interior designer and owner of Colefax & Fowler, Nancy Lancaster (niece of Nancy Astor), when she remodelled Mirador in Greenwood....
zoom_in 5 images 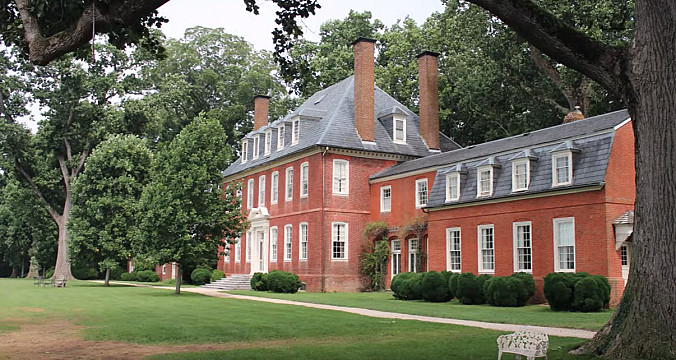 Colonel William Byrd I, "The Black Swan of Westover" Virginia

Colonel John A. Selden, of the Westover Plantation, Virginia

The Black Swan & the Statesman

In the 17th and 18th centuries the Byrds were one of America’s best known families on both sides of the ocean, not merely for their substantial wealth and position in society, but for their cultured and refined tastes. William Byrd I was known as “the Black Swan of Westover” in reference to the birds he introduced to his plantation from England.

William I built the first house here which some believe may have been incorporated into the present mansion, although this seems circumspect. On his death, the plantation was inherited by his son, William Evelyn Byrd II (1674-1744), remembered as a statesman and a man of letters. He was President of His Majesty’s Counsel and the founder of Virginia’s capital, Richmond. For many years it was assumed that William II had built the house as seen today around 1730, but recent surveys have dismissed this assertion.

The Byrd House & "The Westover Doorway"

It was William Byrd III (1728-1777) who sometime after his father’s death in 1744 built the house seen today. It is approached by a long tree-lined drive and sits amidst 150-year old tulip poplar trees and ancient boxwood. Originally, the plantation cultivated tobacco on an enormous scale, which eventually gave way to corn, wheat and soybeans on what remains of the farm today. An expansive lawn leads down to the James River and magnificent formal gardens surround the house with a hedge featuring a rare iron clairvoyee. In the grounds, there is a privy, an ice house, a collection of some fourteen brick barns of different ages and most notably three elaborate 18th century English wrought-iron gates which are without doubt among the most elegant of their kind to be found in America.

The house covers 2,500-square feet and almost all the materials used to construct it were sourced locally, including the distinctive red bricks at a time when most planters shipped such materials from England. The central house of three stories was later connected to the two original wings in about 1900. Architecturally, it stands out for its simplicity in style and proportion. It has an unusually steep hipped roof - one of only two clasp-purlin types in Virginia - and tall chimneys in pairs at both ends of the main house. Its elaborate entrance of Portland stone is the most copied doorway in America, lending its name to the style known as “The Westover Doorway”. The interior has exquisite detailing with moulded plaster ceilings and full length panelling.
A Flutter Too Far

On coming of age in 1749, William Byrd III inherited 179,000-acres, hundreds of slaves, mills, fisheries, vessels, warehouses and a store. But, while being educated in the law at London, he acquired an unhealthy obsession with gambling which despite his great wealth brought him to the brink of financial ruin and this only ended when he took his own life in 1777. His second wife, Mary (Willing) Byrd (1740-1814), of Philadelphia, was left with the onerous task of salvaging Westover and an inheritance for their ten children, and this she managed by selling off her husband’s property in Richmond, Williamsburg etc.

The outbreak of Revolution once again threatened the future of Westover. Mrs Byrd attempted to remain neutral but this merely led to the plantation being raided by both sides in 1781. On attempting to recover property taken by the British, she was accused of trading with the enemy by the Americans. She only avoided a trial by means of an eloquent appeal to future U.S. President Thomas Jefferson (1743-1826), and thus for the second time in only a matter of years skilfully retained the family’s legacy. In 1817, three years after her death, her children sold the estate which was at sometime subdivided and resulted in new houses springing up on the old estate, eg. Evelynton.

Taking Flight before the Seldens

In 1820, the Byrd children sold the estate to their relation, William Carter. In 1821, he sold the property on to Robert Douthat (1800-1858), the winner of the Philadelphia lottery. Seven years later in 1828, it was very briefly brought back into the Byrd family when it was bought by a grandson of William Byrd III, George Evelyn Harrison (1797-1839) of Brandon, until he sold it the following year to Colonel John Armistead Selden.

Selden and his family lived at Westover for nearly forty happy years and they were not in the slightest bit fazed by the ghost of Evelyn Byrd (1707-1737) who had died there of “unrequited love” and apparently appeared before them on at least two occasions! But, on the outbreak of Civil War and with the approach of the Union army, the Seldens fled Westover for another of their plantations further south.

In early 1862, Westover was occupied by Union General Fitz-John Porter (1822-1901), the protégé of General George B. McClellan who was stationed at the nearby Berkeley Plantation. During that time, a cannon ball shot by the Confederates from south of the James River accidentally struck Westover’s East Wing, the wing burst into flames and in doing so - according to some sources - destroyed the Byrd’s library of 4,000-books.

In reference to the Byrd library, it is worth noting that William Byrd II had amassed a collection of 3,625 volumes that was famous throughout the western world, and it may be that the 4,000 books referred to were one and the same collection. If that is the case, then these books were not burnt, they were in fact sold to Isaac Zane (1743-1795) who kept them in Virginia before sending them to Philadelphia to sell at auction. Thomas Jefferson was among those who expressed an interest in buying them, but thought the price too high. They were eventually sold off one-by-one up until about 1800. Zane’s sister, Sarah, donated 124 medical and scientific volumes to the Pennsylvania Hospital and those books are now the largest known single portion of the Byrd collection still to be kept together.

When Colonel Selden returned to Westover in September of 1862, he found the plantation, “swept of everything (and) the estate entirely ruined (so I) should not have known it”. The very next day, Selden sold Westover to two Richmond men, Andrew Elliott and Major Clay Drewry, “for the sum of fifty thousand dollars cash, fifteen thousand dollars less than I had been offered for it before the War.”

In 1866, Westover passed to Drewry’s brother, Major Augustus H. Drewry, who lived here for thirty years. After his death in 1899 it was bought by Mrs Clarise Sears (Risley) Ramsay, who claimed descent from the Byrds and restored its tired interior. Hiring the New York restoration architect William H. Mesereau, she rebuilt the east wing and added hyphens that connected the previously separate 18th century wings to the main house.

Protected by the Cranes

In 1921, Westover was acquired by Richard Teller Crane II (1882-1938) and his wife Ellen Douglas Bruce (1872-1952). Crane was the nephew of his namesake who built Castle Hill at Ipswich in Massachusetts. In 1952, Mrs Crane left the property to her daughter Mrs Ellen Bruce (Crane) Fisher (1914-2008), who is credited for protecting Westover when the estate was threatened with subdivision and halting significant changes to the house when given an open-space easement to the Virginia Department of Historic Resources. It remains with their family today and is occupied by the Crane’s great grand-daughter, Andrea Kulenkampff Fisher (b.1974) and her husband Robert Gustave Erda (b.1973).

The Westover Plantation is now a National Historic Landmark and with an admission fee the gardens and grounds are open to self guided tours. Group tours of the house are available by appointment during Historic Garden Week. It is architecturally similar to nearby Carter’s Grove  which was built in 1755 by the Byrds cousins.

The first Westover Church was a half a mile or so from the present house and the burial grounds contain the tombs that can still be seen today of various prominent early Virginians, including: Theodorick Bland I, William Byrd I, the tragic romantic Evelyn Byrd (1707-1737) who King George II famously complemented on her presentation at Court; Lt.-Colonel Walter Aston (1606-1656) and Benjamin Harrison IV (1693-1745), of the historic Berkeley Plantation, the ancestor of two U.S. presidents.

Plantation Homes of the James River By Bruce Roberts

The Byrds of Virginia: An American Dynasty, 1670 to the Present By Alden Hatch

Journey on the James: Three Weeks through the Heart of Virginia By Earl Swift