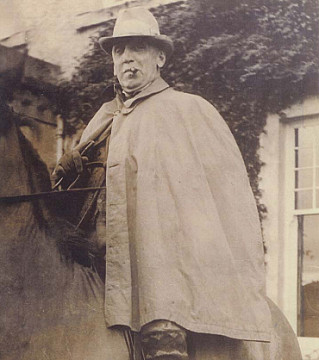 He was born in Cleveland, Ohio, and named for Commodore Oliver Hazard Perry although it was unlikely that they were related, despite his mother's surname. He was educated at Philips Academy, Andover, and Yale University. He fought for the Union Army during the Civil War as Colonel of the 124th Ohio Infantry. After the war, with the encouragement of his childhood friend from Cleveland, John D. Rockefeller, he invested chiefly in iron and oil. He held significant shares in U.S. Steel and became a Director and Treasurer of Standard Oil. He was also a Director of the American Tobacco Company, the Virginia & Southeastern Railroad, the Coal Creek Mining & Manufacturing Co., etc. Although the charges were never brought to court, he was investigated for allegedly bribing members of the Ohio Legislature to attain a seat in the Senate for his father as well as bribing members of the Democratic Party to have his room-mate from Yale and brother-in-law (William C. Whitney) named U.S. Secretary of the Navy.

His fortune in excess of $100 million put him at number 26 on American Heritage Magazine's list of "40 Wealthiest Americans of All Time". He gave $8 million to endow and fund Cornell's Medical School; $1 million to Yale University; $1 million to the New York Public Library; and made several other smaller but significant donations to various other schools, universities and hospitals. He famously fell out with his former close friend and brother-in-law, William C. Whitney, the story of which is told in the history of the Whitney Mansion. He neither married nor had children. His principal heirs were Payne Whitney who received $63 million as well as $650,000 with which to build the Payne Whitney House at 972 Fifth Avenue; Harry Payne Bingham who received his property; and, six other of his nephews and nieces who divided a further $32 million between them. He was a well-known yachtsman and the owner of the Aphrodite which at 330-feet was then the longest steam-powered yacht in the world. He lived between his townhouse at 852 Fifth Avenue and Omega, his country estate at Esopus in Ulster Co., New York.