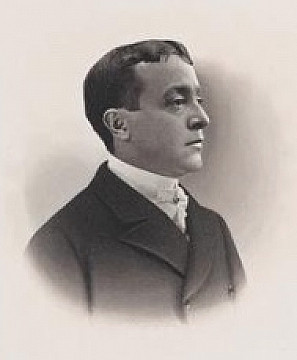 He was born at New York City to a self-made German-Jewish father and a mother with old roots in Rhode Island: he preferred to associate himself with his maternal roots. He studied briefly at St. Paul's in New Hampshire before his father arranged a job for him as a clerk at a bank in Bremen, Germany. He didn't last long at the job but remained in Europe for a further three years. On returning to America, he expressed a desire to pursue a Naval career as per his grandfather and great-uncle for whom he was named, Commander Oliver Hazard Perry, "the Hero of Lake Erie". In 1880, he entered the Naval College at Annapolis but after less than two years (during which time he sailed to China) he dropped out and his father gave him a job in his bank. Not long after, he 'retired' from business altogether, cementing his reputation as a playboy.

Oliver's first marriage in 1882 was over by 1883: Having got Sarah Swan Whiting pregnant he married her but while on Honeymoon in Paris he unleashed an absinthe-fuelled tirade against her before leaving for a spree of gambling and whoring. Rather than sober up, he then ditched her altogether in favor of a dancer with whom he hot-footed off to Bordeaux...! In 1891, he commissioned Richard Morris Hunt to build Belcourt in which he lived alone in a household with 30-servants presided over by his six-foot-five Egyptian valet, Azar, and 15-pampered horses that were housed on the first floor.

He finally found love in his friend's wife, the redoubtable Mrs Alva Vanderbilt, and they were married in January, 1896. She finally instilled some direction to his life and on the outbreak of war with Spain in 1898 he offered the government a fully equipped gunboat to be built - and commanded - by him on the plan of the old dynamite cruiser, Vesuvius. President McKinley politely declined his offer. In 1899, he started a weekly magazine called The Verdict to, "fight trusts, monopolies and the money power on behalf of the common man" and in 1901 he was elected to the U.S. Congress as a Democrat but in the following year his name was not among those put forward for renomination.

He and Alva lived principally between Belcourt and Brookholt on Long Island where he died after having his appendix removed - a few months before their mansion at 477 Madison Avenue was finished. He left an estate estimated at about $5 million plus his property to Alva. They are buried together at Woodlawn Cemetery in The Bronx in an elaborate Richard Howland Hunt-designed mausoleum which is an identical replica of the Chapel of St. Hubert at the Château d'Amboise in France's Loire Valley.