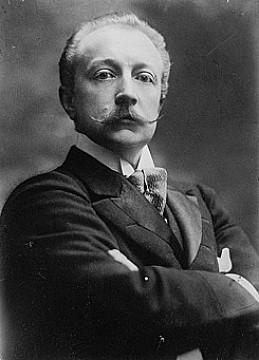 Born to an aristocratic, very well-connected, but financially decaying family in Paris, Boni took himself off to find an heiress in New York. On arriving in 1894, he was as open about his intentions as if he were there on a business trip. Having rented a modest apartment in Manhattan before his marriage, within just one year of bagging Anna Gould he had persuaded her to buy a yacht and two chateaux before hiring the entire Bois de Boulogne (akin to Central Park, just double the size) for a party!

The interest from his wife's $15 million trust fund gave her $500,000 a year, but after just one year of marriage, the penniless aristocrat had the gall to complain that he was "hard up" and set his lawyers to work on accessing his wife's capital. In 1896, the doors sprung open and now Boni got to work: they bought 2.5 acres on Avenue Foch in Paris and hired Ernest Sanson to build him - and his wife - a pink marble replica of the Grand Trianon which Boni then decorated with, "the fervour of a Florentine prince"!

For all his greed and vanity, Boni did have an exceptional eye for quality and always knew the right price to pay for an antique. This proved to be his saving grace as after romping through $10 million of his wife's money and several extra-marital partners, Anna finally saw him for what he was and divorced him in 1906, forbidding him further contact with her sons. Though easy enough for Anna to divorce him, the Vatican did not allow him to divorce her for a further 20 years, which became something of a public farce!

Boni was once again penniless, but he fell back on his expertise to become an antiques dealer and on his humor to write "The Art of being Poor" - though of course, being the man he was, he died heavily in debt. He may have cost the old Robber Baron's daughter a dime or two, but many American museums have unquestionably profited from his expert eye. In the book, À La Recherche du Temps Perdu (1913), the famous French author Marcel Proust based the bisexual aristocrat 'Robert de Saint-Loup' on his friend Boni. Another friend, Nellie Melba, recalled of him: "He has his enemies and he has his detractors; but I believe that his name will live long after they have been forgotten". She was right.