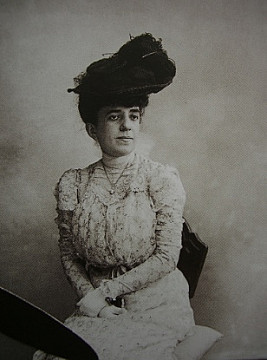 She was the daughter of one America's most infamous "Robber Barons" and grew up in New York. To the prospective 19th century suitor, what she lacked in looks she more than amply made up for in fortune: she was an heiress worth a whopping $15 million in 1895, giving her an annual income of some $500,000. That year, having spurned a string of eager bachelors, she fell for the affected charm of "Boni" the effete young Comte de Castellane who would become the Marquis de Castellane on the death of his father. The American playwright who had adopted Paris as her home, Natalie Clifford Barney (1876-1972), was decidedly unimpressed: "she is the most unwashed and dirty-looking creature I ever laid eyes on, and he the most insipid. Quel ménage!"

Despite appearances, Boni's family were far from rich: Anna's brother, George, had to pay for Boni's parents to travel to New York for the wedding, but he refused to pay for their return which led to the penniless Marquis calling Americans "a stingy race"! As soon as Boni had banked his bride, he set about devouring his way through her $15 million fortune building the Palais Rose, a pink marble replica of the Grand Trianon, before decorating it "with the fervor of a Florentine Prince"! Within just one year, Boni claimed to be "hard up" and enacted lawyers to get his hands on his wife's capital. After eleven years of marriage, he burned his way through $10 million of her money, which coupled with extra marital dalliances - unsurprisingly - culminated in Anna getting a divorce and forbidding him from seeing their children. Time magazine recalled the marriage as, “an 11-year phantasmagoria of pink marble palaces and $150,000 parties during which the Parisian gay blade skated through more than half (try two-thirds!) of her inheritance”.

To the infuriation of her family, just two years later (1908) Anna could not be dissuaded from marrying another French aristocrat, the 4th Duke of Talleyrand-Perigord. It was bad enough that he was the son of a famous French dandy; even worse that his only brother was divorced from another American girl after just two years of marriage; but, to add insult to injury, he was a first cousin of her first husband! Despite all of that, much to her family's surprise (and delight!), they remained happily married and lived quiet, dignified lives until the Duke died in 1937. The following year Anna returned to America and took up residence at her childhood home, Lyndhurst, where she lived until her death in 1961.