P.A.B. Widener, of Philadelphia, founder of the Widener family fortune 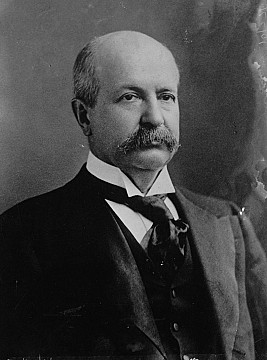 Widener was one of America's most prolific collectors and connoisseurs of fine art, building Lynnewood Hall to house his vast collection. Having started life as a butcher's apprentice, Widener's fortune began when he won a $50,000 government contract to supply meat to the Union Army around Philadelphia during the Civil War. This enabled him to become a founding partner of the Philadelphia Traction Company that built public transport systems in Philadelphia, New York and Chicago. Growing on that success, he became a principal partner in U.S. Steel and the American Tobacco Company, with substantial holdings in Standard Oil too. He accrued a fortune of $100 million that placed him alongside the Astors and the Vanderbilts. Today, he is recognized as one of the 100 wealthiest Americans to have ever lived, and though a "robber baron," his passion for art made him a significant philanthropist. Despite his fortune, he died heartbroken after his son and grandson were killed on the Titanic