Built in 1902, for the artist Ralph Wormeley Curtis (1854-1922) and his wife Lisette DeWolf Colt (1867-1933), widow of the architect Arthur Rotch. They named their new home for their first born child, Sylvia, a god-daughter of Isabella Gardner Stewart. The house was designed by Aaron Messiah (1858-1940) who ten years later would complete his most famous work just a stone's throw up the hill for Beatrice de Rothschild, the Villa Ephrussi. The gardens were designed by Harold Peto (1854-1933) and were strongly influenced by those at the Villa Medici in Tuscany which was purchased a few years later by Lady Sybil Cuffe. From 1960, Villa Sylvia became known as "Baia dei Fiori" when it was sold to an American heiress who that year had married Ilhamy Hussein Pasha, 25-years her junior and widower to an Egyptian Princess 32-years his senior....
zoom_in 6 images 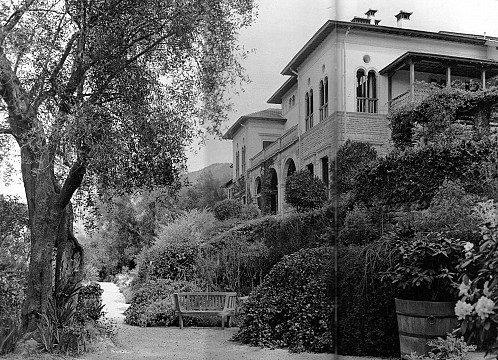 Ralph Curtis came from old and wealthy families in Boston and Virginia. He studied law at Harvard but on graduating persuaded his parents to allow him to study art in Paris where he became close friends and was influenced by John Singer Sargent. He remained there and became an impressionist painter of some note. Following their son's lead - or the very Victorian "assault" involving his father, related here, that both enthralled and perplexed society - his parents left Boston and bought the magnificent Palazzo Barbaro in Venice which then became a magnet for the cultured American elite. Ralph's wife, Lisa DeWolf Colt, was the niece of Samuel Pomeroy Colt who succeeded to the storied Linden Place on Rhode Island and she was a grandniece of the arms manufacturer, Samuel Colt.
Ralph and Lisa's Italian-style villa is found today on the Avenue Denis Semeria at the corner of Avenue de Grasseuil. Located just south of the town of Beaulieu-sur-Mer, their villa is still topped with its distinctive green-glazed tiles and enjoys a sweeping view to the west over the bay of Villefranche. The bay is well known for its depth and in 1917 U.S. warships dropped anchor here and disembarked via their estate. Even today, the villa sits on 3.7-acres of prime real estate, but Sylvia's son, Theo, commented on a post from 'The Blue Remembered Hills' that back then the estate was so large that the head gardener (Bernardo) and his team were kept constantly busy in their efforts to ensure that its flora and fauna were in full bloom all year. When the Nazis occupied France during WW2, mimosa from the estate was sent up to Sylvia and her sons holed-up in Paris.

Ilhamy Hussein (1908-1992) was a dashing Turkish nobleman with a gift for making considerably wealthy - and considerably older - women go weak at the knees. In 1927, aged just 19, he married the 51-year old Princess Shivakiar Ibrahim (1876-1947) who was first married - for two years at least - to King Fuad I of Egypt. She divorced her way through another three husbands before young Ilhamy became hubby number five. Together they threw legendary parties at their home, the Qasr al-Aali Palace in Cairo, which was run by their English butler "Spencer" and a small army of handsome servants of various nationalities attired in 18th century garb, topped by red tarbooshes and golden tassels!

Ilhamy's Princess died in 1947 and the legendary parties came to an abrupt end when her stepson, King Farouk I, was overthrown by Nasser and his cohorts in 1952. Ilhamy's property was confiscated and sold-off and like many a wealthy refugee before him, he sought refuge in the South of France. Not exactly left destitute, he took rooms at the five star Hôtel de Paris in Monte-Carlo, where he no doubt set many more hearts a-flutter.

At the hotel, he met his second wife, the widowed heiress Mrs Myrtle Macomber - 25-years his senior. Her grandfather, Stephen Harkness, was one of the three major partner's in Rockefeller's Standard Oil company and when her father died he left $100 million. Myrtle and Ilhamy were married in 1960 and in the same year they purchased the Villa Sylvia which they renamed "Villa Baia dei Fiori" and began furnishing in lavish style.

In 1946, Ilhamy was sunning himself by an hotel pool in Monte Carlo when a little girl accidentally splashed him. Her father stepped in, took her away and admonished her, and thought no more of it. Later in the day, a small truck full of toys was delivered to their room with an invitation to dinner. While eating caviar with the Pasha and wondering what it was all about, their host casually - but quite seriously - asked if he could purchase his daughter, lamenting that he had no children of his own. Astounded, the man flatly refused, and Ilhamy just as casually moved the conversation on to what the man did for a living. The man explained he was an inventor and had a plan to modernize the perfume bottle. Ilhamy offered his unlimited backing and the man, Peter Florjančič, developed the perfume atomiser, and with it the "Florilham" (Florjancic/Ilhamy) company was born. The plastic zipper, plastic ice skates, and the airbag too were all developed by Florilham.

The Auction that Marked the End of an Era

Whether or not the Pasha tried to buy an heir again is unknown, but if he did he remained - thankfully - unsuccessful. After Myrtle died in 1962, he lived alone for the next thirty years, but having been left almost the entirety of her fortune, he lived in some style. His closest friends included Grace Kelly, Princess of Monaco; Florence, the widow of hotelier Frank Jay Gould; and, the Duke and Duchess of Windsor were guests at his parties. In his final years, he lived in almost entire seclusion and was attended to only by a companion who combined the roles of confidential secretary, male nurse, and pétanque partner.

In 1993, the 3,000-piece collection of art and antiques with which he had surrounded himself was sold over a five-day period. It attracted 25,000 buyers from all over the world (many attired in evening dress to mark the glamor of the occasion), and when all was done the sale achieved $13 million - not including the pieces he had already sold for $6 million in his lifetime. The collection included a profusion of Chinese porcelain; Persian carpets; tapestries from Brussels, Beauvais and Gobelins; one of the world's most impressive sets of Louis XVI gilt chairs; almost every picture painted by Vlaminck for which Ilhamy had a passion; and, a large collection of the Fauves, plus paintings by other artists such as Utrillo and Kees van Dongen. The sale marked the end of an era on the French Riviera.

After Ilhamy's death in 1992 most of his considerable fortune was left to his nephews and nieces in Turkey and the villa was put on the market, expected to fetch somewhere between $27 and $36 million. It was reportedly last bought by a Greek shipping magnate, and maintains the name that Ilhamy and Myrtle gave it back in 1960.

Chanel's Riviera: Life, Love, and the Struggle for Survival on the Côte d'Azur, 1930-44 By Anne de Courcy

The Riviera Set: Glitz, Glamour, and the Hidden World of High Society By Mary S. Lovell

The Great Edwardian Gardens of Harold Peto: From the Archives of Country Life By Robin Whalley

Everything is Permissible: The Second Book of Farouk By John Whitbourn

Nothing Is True... The First Book of Farouk By John Whitbourn

The Invitation By Lucy Foley

Riviera Dreaming: Love and War on the Côte d'Azur By Maureen Emerson

Travels Through the French Riviera: An Artist’s Guide to the Storied Coastline, from Menton to Saint-Tropez By Virginia Johnson