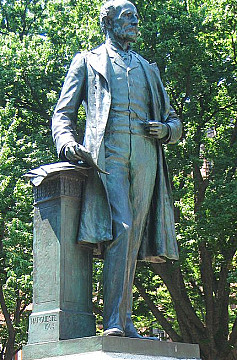 He was born at Baltimore, Maryland, and was educated at St. Mary's College before studying law in the offices of Attorney-General Wirt. He developed an interest in Spanish literature and history that in 1843 saw him made a member of the Royal Academy of History at Madrid. In that same year, one of his escaped slaves, Philip Collins Johnson, was found working as a janitor at Princeton University and was subsequently arrested and tried under the Fugitive Slave Act of 1793. Wallis helped the prosecution and Johnson was convicted. But, before he could be returned to slavery his freedom was purchased by Theodosia Prevost, step-grand-daughter of Aaron Burr Jr., and he went on to become, "a beloved mascot of the college" during his 60-years on campus.

In 1849, the U.S. government sent Wallis to Spain on a special mission to examine the land titles in East Florida detailed in the Treaty of 1819 when Florida was annexed to the United States. He was a frequent contributor to the Baltimore Exchange, the publisher of several pamphlets on legal and literary subjects, and in 1846 was made a Fellow of the Royal Society of Northern Antiquaries in Copenhagen, Denmark.

Politically, he was a Whig and then a Democrat. In 1861, he was elected to the Maryland House of Delegates and was active in the special proceedings of the Maryland Legislature over the question of secession. He was Chairman of the committee on Federal Relations and instrumental in the Legislature's opposition to secession and war. In September, he was arrested with many other legislators and imprisoned for 14-months for not citing the Union Oath before a succession vote. Among the other prisoners was Henry M. Warfield, who named his son - the father of Wallis, Duchess of Windsor - for him. After the war, he returned to private practice in Baltimore and was Chairman of Maryland's Art Committee. In 1870, he was appointed Provost of the University of Maryland. He was unmarried and today his statue stands at Baltimore's West Mount Vernon Place, facing St. Paul Street.