Stephen Sayre, American High Sheriff of the City of London 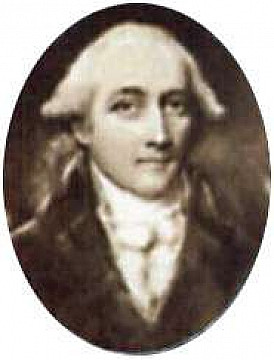 He was born at Southampton, Long Island. Having graduated from Princeton (1760) and served as a Captain in the French & Indian War, he left New York and settled in London where he was known as a charismatic banker with the firm of Sayre & Barth-Coote-Purdon: "He was conspicuous for personal elegance and accomplishments, and was said to be the handsomest man in England". He lived on Oxford Street and, "moved in the best society". He was a close friend of the Earl of Chatham, Boston-born Barlow Trecothick, and Thomas Jefferson. He was among the most vociferous supporters of American independence and when his friend, the radical John Wilkes, became Lord Mayor of the City London (1774), Sayre was appointed High Sheriff.

In October, 1775, he was arrested for high treason when it emerged that he (among others) had allegedly hatched a daring plot to kidnap King George III and have him returned to Hanover! He was imprisoned in the Tower of London, but the press were quick to acknowledge that his arrest was based, "upon an Information so romantic, so foolish, so absurd, that if they thought the Accused could have done what he was charged with, he ought to have been committed to Bedlam, not the Tower"! After a few days, Lord Mansfield declared his imprisonment unlawful and he was released on paying £1,000.

Returning to America, he was private secretary to Benjamin Franklin and in 1777 accompanied U.S. Envoy Arthur Lee to Prussia. In an unofficial capacity he travelled to Copenhagen, Stockholm and St. Petersburg raising funds for the American war effort. When peace was declared in 1783, he and his wife returned to New York City before buying Point Breeze in New Jersey which was royally transformed after they sold up in 1816 to the deposed King of Spain, Joseph Bonaparte. He was married twice: His first wife, Elizabeth, was the daughter of Chief Justice William Noel, M.P. After she died, he was married to his second wife, Elizabeth Dorone, at Paris. Having sold Point Breeze, he and his second wife retired to his only son’s plantation in Virginia, where he died in 1818.