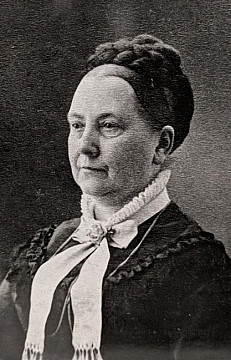 She was her parents' only child and grew up predominantly in New York City. On October 23, 1850, she married Naval Lieutenant William S. Drayton, a cousin of the Draytons of Drayton Hall, South Carolina. In 1861, the year after her husband died, she purchased an estate at Hyde Park in New York that she named Drayton House in his memory. In 1862, she converted to her mother's Catholic faith. On doing so, she financed the construction of "Regina Coeli" Hyde Park’s first Catholic Church, on Harvey Street, described as, "a small but beautiful structure featuring an English-Gothic design". In 1868, at the British Embassy in Paris (and afterwards at the Madeleine), she marrried Temple Kirkpatrick, then Secretary to the British Legation at Berlin. She died while staying with her husband's relatives on the Isle of Wight in England. She was survived by two children from her first marriage (Maud and Percival) and her only child by her second marriage (Sylvia) but all three died without issue.