Built circa 1748, for The Hon. John Drayton (1715-1779) and the third of his four wives, Margaret Glen (1713-1772), younger sister of Governor James Glen. Situated 15-miles northwest of Charleston, Drayton Hall was home to seven generations of the Drayton family and is one of the most outstanding examples of 18th century Palladian architecture in the United States. Through a combination of both luck and guile, it is the only Plantation House on the Ashley River to have survived - fully intact - both the Revolutionary and Civil Wars, as well as countless hurricanes and earthquakes. The South Carolina Department of Archives & History stated that the iconic Drayton Hall is, "without question one of the finest of all surviving plantation houses in America"....
zoom_in 16 images 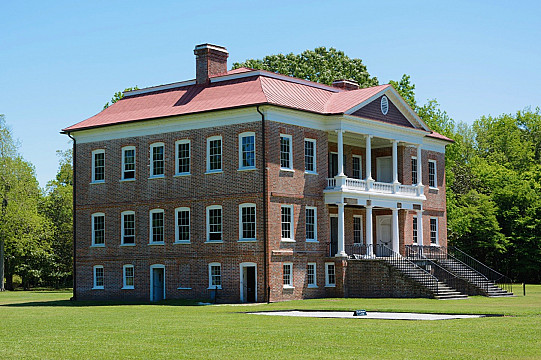 In January, 1677, Nicholas Carteret received the original 1,500-acre grant on which the Hall would be built. The following year (1678), he divided the patent in two and the 750-acres in which we are interested was acquired by Edward Mayo (1650-1724), a Quaker. Just two years later (1680), Mayo sold it on to Joseph Harbin (d.1692), another Barbadian Quaker who built the first plantation house on the property. Ironically for a slave-owner, his son was captured on the Mediterranean by Barbary Pirates and enslaved at Morocco. Over the next 30-years, the land was subdivided and changed hands every few years until the 25-year old bachelor John Drayton bought 350-acres of the original patent in 1738.

John Drayton was the son of an English-born Barbadian planter who came to South Carolina in 1679. He was born at the Magnolia Plantation (still owned by the Drayton family today) a mile to the north of Drayton Hall, but as the third son he did not to stand to inherit. He was just eleven when his father died and it was his mother, Ann (1680-1742), who more than successfully took over the running of the family plantation and it was she who facilitated John's advancement in society and helped him become a significant landowner: by the time John died, he owned over 76,000-acres.

Until 2014, it had been assumed that he built Drayton Hall between 1738 and 1742, but an archeological survey found that at the earliest it dated from 1748 and was not lived in until 1752. The main house appeared then just as it does now, except then there were two wings attached either side by curved colonnades. The architect was almost certainly Drayton himself and the overall superior quality suggests that he imported craftsmen from England to build it along with his 80 slaves and indentured servants. The bricks were fired on site and the fingerprints of the slave children who compacted them are still visible.

John and all his sons took up with Patriot cause during the Revolution. In 1779, as the British army approached, John gathered up his family and what valuables they could take with them and made their escape across the Cooper River. But, during the crossing John suffered a seizure and died. In 1780, Drayton Hall was requisitioned by the British General Sir Henry Clinton (1730-1795) and his army of 8,000 troops camped here for a week before laying siege to Charleston. It then became the headquarters of General Charles Cornwallis (1738-1805) until 1782 when General "Mad Anthony" Wayne took it back. Drayton became his headquarters while his army drove the British out of Charleston. The house survived, but the formal gardens, crops, and most of the outbuildings did not.

John's eldest son, the distinguished firebrand Patriot Chief Justice William Henry Drayton, died only a matter of months after his father - and some say his ghost still haunts an empty room upstairs. Five years later, at the conclusion of the Revolutionary War, his younger brother, Dr Charles Drayton (1743-1820), purchased Drayton Hall from their (much younger) stepmother, Rebecca. Charles was married to Hester Middleton (1754-1789), the younger sister of his friend, Arthur Middleton (1742-1787), of Middleton Place; and, on moving into Drayton Hall, he became Lieutenant-Governor of South Carolina.

Charles was educated at the best schools in England and after leaving Oxford he took a degree in medicine at Edinburgh. He was a true gentleman planter: both intellectual and curious, he had the time and the money to indulge his whims. He was a prolific diarist and writer of letters who took a deep interest in science, botany, architecture, landscaping and agriculture. He conducted his own weather experiments, applied the latest methods of farming, and encouraged his slaves to become skilled blacksmiths, coopers, carpenters etc.

In the house, Charles was one of the first people in the country to convert his traditional fireplaces to the new "Rumford Firebox" design, allowing for far greater efficiency. In the gardens, he is best remembered for trenching out a ha-ha to open up the view over the Ashley River; and, he created ponds for freshwater fish to serve at his table. He was a great friend of the French botanist Andre Michaux (famous in America for introducing the Gingko tree) and another celebrated friend, Thomas Jefferson, sent him 118 olive stones from France to sample at Drayton Hall, though the climate proved unfavorable.

Surviving Civil War - for fear of the Admiral or the Smallpox?

All three brothers took up with the Confederates, but it was John who remained to watch over Drayton Hall. Opinions differ as to how the house managed to survive this period: one story goes that as a Union gunboat was making its way up the Ashley River destroying all the plantation houses in its wake, the family butler (a former slave) paddled out to meet it and begged them not to destroy "the Admiral's" house. The "Admiral" was in reference to Admiral Percival Drayton (1812-1865), a cousin of the Draytons at Drayton Hall but despised by them for not only allying himself to the Union, but then defeating his own brother, Confederate General Thomas F. Drayton (1809-1891) at the Battle of Port Royal, South Carolina. Another version (though both "distasteful to many Southerners") was that the Admiral had given specific orders to spare his family's ancestral home.

The more popular story told of Drayton Hall's survival is that the wily Dr John Drayton posted a notice at the entrance to the property warning of its use as a hospital for victims of the smallpox. Another version of the same story says it was a Confederate officer who transferred a number of slaves infected with smallpox up to the house. Either way, by whichever story you prefer, Drayton Hall emerged from the War unlooted and unscathed, except for some graffiti by Confederate soldiers still visible under the stairs.

The end of slave-maintained crops triggered an immediate and urgent need for fertilizer (derived from phosphates) among the now labor-poor plantation owners of the south. Before Dr John Drayton handed Drayton Hall over to his nephew, from 1866 he secured two phosphate mining contracts that ensured the estate's future into the 20th century. On coming of age, Charles H. Drayton (1847-1915) built a narrow-gauge railway, fifteen houses and two stores to help the workers and improve the overall operation of the mines.

The mines were not attractive and they came within less than a thousand feet from the house, but the profits were such that by 1885 the house (including a new roof) and formal gardens were restored and improved. Where a small creek once stood, the now much-photographed reflecting pool took its place; and, the earth removed was sculpted into the decorative mound now seen between the pool and the house. Aside from a small bridge, Charles also planted an alley of azaleas leading down from the house to the river.

The main house came out unscathed after the earthquake of 1886, but it flattened the flanker that contained the laundry. In 1893, a hurricane restored some symmetry by flattening the other (kitchen) flanker, giving the house its present appearance.

Just as it always had been...

In 1886, Charles H. Drayton built a new home at 25 East Battery in Charleston and from then on the family only used Drayton Hall as an occasional weekend and summer home. However, they were mindful to build a caretakers cottage to ensure the house was well-maintained and neither robbed nor vandalized. By 1926, Charles, his wife and two of his four children had died, leaving just Charlotta and her younger brother, Charles.

Charlotta was greatly attached to the house - in its original, romantic, state - untouched by modernity. Today, the house is singular among any other like it for having neither plumbing nor electricity. It was considered, but the work would have caused irreversible damage to its original features and as the family only intended to continue using it as a vacation home, they felt no need for it. In winter, Charlotta used a single wood-burning stove for heat; and, in summer she allowed herself a refrigerator, but took the power from a lead run all the way across from the caretakers house! The privy remains outside.

In the 1930s, Henry Francis Dupont (1880-1969) contacted Charlotta in a bid to purchase the Great Hall and have it moved into Winterthur. Despite offering to pay for everything, including rebuilding a replica in its place, his offer was politely but firmly turned down.

From Home to House Museum

When Charlotta died in 1969 she willed Drayton Hall to her two nephews (Charlie and Frank) with the stipulation that it should not be modernized in any significant way. The brothers enjoyed it for a few years holding occasional candle-lit dinners and parties, but the cost and responsibility of maintaining it soon became prohibitive. In 1974, the brothers sold the house and 125-acres to the National Trust for Historic Preservation while the remaining acres were purchased by the State of South Carolina.

Since 1977, Drayton Hall has operated as a unique and iconic house museum offering the public a rare chance to take a step back in time. The historian Suzanne Turner has called Drayton Hall, "the most significant undisturbed historic landscape in America".

A New World Gentry: The Making of a Merchant and Planter Class in South Carolina, 1670-1770 By Richard Waterhouse. Foreword by Charles Joyner

The Road to Charleston: Nathanael Greene and the American Revolution By John Buchanan

American Enlightenments: Pursuing Happiness in the Age of Reason By Caroline Winterer

A Fatal Mercy: The Man Who Lost the Civil War (A Novel) By Thomas Moore

Our Man in Charleston: Britain's Secret Agent in the Civil War South By Christopher Dickey

The Widow of the South By Robert Hicks

City of Heroes: The Great Charleston Earthquake of 1886 By Richard N. Cote