Built in 1853, for Joseph R. Curtis (1813-1886) and his wife, Marie-Louise Rabineau (1814-1891). Nothing quite as ambitious as their showpiece home had been seen in the Hudson Valley since perhaps Major John R. Livingston's Massena was put up back in 1796. Not a trace of it remains, but it was sited directly across the Albany Post Road (Route 9) from St. James' Church, just north of where the visitor's center for the Vanderbilt Mansion is located today. Each of its three owners gave it a different name - Templestowe, Drayton House and Torham. It was known as Drayton House the longest....
zoom_in 10 images 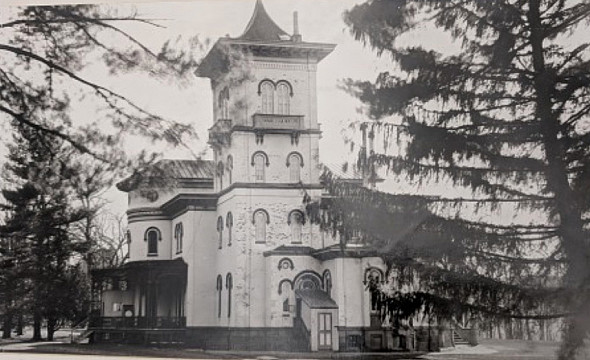 Joseph R. Curtis is usually summed up in one line as, "a nouveau-riche New Yorker who made a fortune in the Californian Gold Rush". He did make a fortune in California, but there was rather more to him than that, starting with his immediate family: His cheerful and popular father, Joseph Curtis (1782-1854) was, "a distinguished and venerable friend of public education" and, a tireless and effective campaigner for bringing about an end to slavery and providing free education for African-Americans; and, his sister was married to L. Gaylord Clark, Editor and Publisher of The Knickerbocker magazine from 1834 to 1861, then described as, "the most influential literary publication" in the United States.

Joseph's aunt was married to an entrepreneurial New Yorker, John L. Moffat (1788-1865), who owned and operated several gold mines in Georgia from the 1830s. Joseph helped his uncle run the mines for several years before hauling their coinage equipment all the way overland down to California. In 1849, they established Moffat & Co., at San Francisco, producing gold coins and ingots. They quickly became California's most important private mint, "earning the highest respect for their product and integrity" and just one year later (1850), the U.S. Assay Company contracted them to issue the new Federal coinage.

Since 1828, the distinguished Dr David Hosack had been the proprietor of the "Hyde Park" estate. When he died in 1835, his heirs conveyed 60-acres of that estate to his widow, Magdalena, on which stood "the cottage" just north of the main house that is better known today as the Vanderbilt Mansion. Mrs Hosack used the cottage as her summer home until she died in 1841 and in the following year (1842) her heirs sold the same 60-acre farm to Augustus T. Cowman. By 1853, several of Cowman's real estate ventures had failed and that year he was obliged to sell his farm at Hyde Park to Joseph R. Curtis.

Curtis had been quite comfortable at "the cottage," and it was only when an architect from Philadelphia (whose identity still remains a mystery) repeatedly "got at him" that he almost 'relented' to the idea of building his enormous, towered Italianate mansion. The house that he named "Templestowe" was put up in the cottage garden, on the river bank.

The Curtis' "magnificent chateau, with all the beauties of architecture and modern improvements, conveniences and luxuries" was described by a friend who was staying with them as it was being built: "On the river side is a broad and large stone platform, reached by extensive stone steps, and surrounded by a stone balustrade, with a large portico of the same material, supported by pillars, and from this you enter an octagon vestibule, lighted from the roof through a dome, and communicating with the drawing-room, dining saloon, sitting parlor, library, study and conservatory. There are numerous fine and airy chambers on the floor above, besides those in the tower on the north angle of the building, which rises to the height of 40-feet, with a large iron tank under the roof, which is to be constantly supplied from a beautiful spring on the brow of the hill".

Aside from the mansion itself, the grounds around Templestowe were landscaped and included a boathouse. The Curtis' employed a resident gardener called Chalmers who lived on the estate and tended to the greenhouses, hothouses, kitchen garden, and fruit orchards. Their guest surmised, "it will be hard to find among the many splendid country residences of this country anything to surpass Templestowe". But, even for a man who literally made money, the running costs for such a property began to catch up with Mr Curtis and just eight years later in 1861, he sold up to a young widow, Mrs Sylvia Drayton.

By birth, Sylvia was a Livingston which needs little explaining in Dutchess County. To give an idea of the world she was born into, one of her uncles lived at Grasmere and another at the Mills Mansion in Staatsburg. Her mother was entirely French by blood though American by upbringing, and her family was no less storied: Sylvia was named for her grandmother, Sylvie, the daughter of the famous French Admiral, Le Comte de Grasse, and the wife of Francis de Pau, a rich, corrupt, slave-trader masked by a noble name.

At the start of 1860, Sylvia was 29-years old, happily married with three children and living between New York and her country home at Staatsburg. That February, she lost her husband, William, followed by her eldest daughter only a few days later. As might be  expected, this had a profound affect on her: she converted to her mother's Catholic faith and in 1862 financed the construction of "Regina Coeli" Hyde Park’s first Catholic Church. It's very possible that she was drawn to Templestowe not only for its tranquility, but because in many ways it resembled a Catholic Basilica as might be found in Italy or Spain.

On acquiring Templestowe, Mrs Sylvia Drayton immediately changed its name to "Drayton House". Her husband had been a Lieutenant in the U.S. Navy before resigning his commission to work for his father-in-law's shipping business, which he in turn had inherited from his father-in-law. William grew up in Philadelphia, but he was a cousin of the Draytons of Drayton Hall in South Carolina; and, although it may be that the only reason that magnificent plantation house survived the Civil War was due to the influence of William's distinguished brother, Admiral Percival Drayton, nonetheless William and Percival were detested by the majority of the Draytons for having sided with the Union.

Other than changing its name, Sylvia made no changes to the house nor the gardens. She travelled frequently and when she was here, she lived here quietly. In 1868, she was married again at Paris to an English diplomat, Temple Kirkpatrick, by whom she had one further child, a daughter, born in France. She died in 1882, and from then until 1889 the house was leased to the Rogers Family while their 80-room castle, Crumwold, was being built. At the end of the lease, Hiram V.V. Braman purchased it from the Drayton- Kirkpatricks for his nephew, Samuel Braman Sexton, who took ownership in 1890.

Samuel B. Sexton grew up at Hyde Park. In 1886, he entered Columbia Law School but dropped out after two years on account of his health. He took the next two years out to travel around Europe before returning to Hyde Park and taking up residence at the estate he renamed "Torham". He lived here during the spring and the fall, and on weekends in the winter. The origin of the Sexton/Braman fortune is not immediately obvious, but as a man who did not work and was still able to live as he did (see images), it was clearly considerable. He was married in 1893 to Jean Hunter Denning, whose father was both a close friend and business associate of the "Merchant Prince of America" A.T. Stewart.

On September 13, 1899, the servants were busy cleaning the house in preparation for the Sextons who were due to arrive imminently after having taken a trip to Europe. But, that night, oil-soaked rags that had been used for polishing the furniture and floors caught fire. Some of the books, furniture and paintings were rescued, but the mansion was entirely consumed. Nonetheless, the Sextons maintained a house at Hyde Park and might have been considering rebuilding but just four years later (1903) Samuel's diminished health finally caught with him and he died aged just 34 at Augusta, Georgia.

In 1905, the widowed Mrs Jean Sexton sold the 64-acre estate to her neighbour to the south, Frederick W. Vanderbilt. Incorporating it into the Vanderbilt Estate, he returned the landscape back to how it had been when it was part of Dr Hosack's gardens. Today, not a trace remains of the showpiece home that stood just north of the visitor's center.