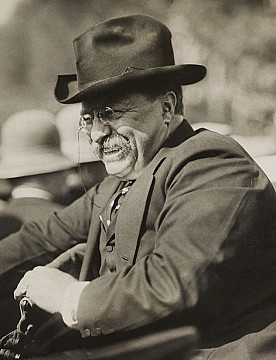 He was preceded in the Presidency by William McKinley, stepping in after he was assassinated in 1901. After serving two terms in office for the Republican Party he was succeeded in 1909 by William Howard Taft. Having originally been McKinley's Vice-President, he completed his first term without a Vice-President before appointing Charles W. Fairbanks for his second term. He is the only U.S. President born in New York and he was the uncle of First Lady Eleanor Roosevelt who married his distant cousin, the 32nd U.S. President, Franklin Delano Roosevelt. In 1880, he married his first wife, Anna Lee, but she died in childbirth in 1884 survived by his eldest daughter, Alice. In 1886, he married Edith Carow and had a further five children.

The Rise of Theodore Roosevelt By Edmund Morris

The Rise of Theodore Roosevelt By Narrated by Mark Deakins