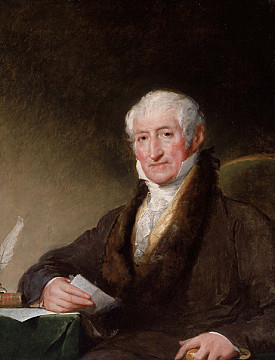 He was born "Ward Hallowell" in 1747 at a large house on the corner of Boylston and Center Streets in Jamaica Plain, near Boston. His mother's elder brother was Nicholas Boylston (1716-1781), an extremely wealthy, but unmarried and childless merchant who moved to London. His uncle offered to make Ward his sole heir if he would come to London, continue his business, and change his name to "Ward Nicholas Boylston". Coincidentally, Ward's younger brother - a distinguished Admiral in the British Navy and one of Nelson's "Band of Brothers" - changed his name too, becoming Sir Benjamin Hallowell-Carew on inheriting Carew Manor at Beddington Park in England.

In 1771, Ward's name was changed by Royal License at which point his cultured and refined uncle suggested that he should see something of the world before coming to work for him: In October, 1773, Ward left Boston for Newfoundland on the King of Naples and from there set off on a two-year adventure through Europe and Africa. From Newfoundland he sailed to Italy then Turkey, Syria, Palestine and Egypt. He was the first American to visit Smyrna, Baalbek, Jerusalem and Cairo. He travelled back up to Europe via the Barbary Coast (Libya, Tunisia, Algeria and Morocco) and then passed through Savoy (Nice etc.), Geneva, France, and Flanders before arriving in London in 1775.

The Boylstons were proud Americans, but they were also Loyalists. From 1775 to 1800, Ward lived in London and continued his uncle's businesses. In 1794, the young son (John Quincy Adams) of his second cousin dined with him in London and recalled: "Boylston is a little of the virtuoso as usual. Shewed us several of the curiosities in his possession. Gave us some of the genuine Water of the Nile, which was clear as crystal... He has travelled into the Holy Land, and gave us quite an amusing account of his pilgrimage".

In 1800, another of his uncles died, this time Moses Gill, the 4th Lieutenant Governor of Massachusetts, and Ward now became heir to his estate too. Returning to Boston in 1800, the will was settled four years later. In the meantime, he found a legal loophole to reclaim his parents' old home, the Hallowell House in Roxbury. He also confirmed a bequest made by his uncle, Nicholas Boylston, to Harvard University, using $23,000 to fund the Boylston Professorship of Rhetoric and Oratory. In 1802, he funded the Boylston Medical Library at Harvard (now part of the Boston Athenaeum); in 1817, he funded the Boylston Prize for Elocution - which is still awarded; and, today Harvard's Boylston Hall is named for both him and his uncle. A contemporary, Dr Nathan Allen recalled:

"Mr. Boylston... was remarkable for his politeness to all with whom he came in contact. He possessed an unusual amount of intelligence and liberality in his benefactions. While residing in London he became familiarly acquainted with the celebrated Dr. John Hunter, and having had two uncles in this country (America) distinguished members of the medical profession, he became greatly interested in all matters pertaining to medicine. For this purpose he made some handsome donations to Harvard University, so that the name Boylston is honored, being attached to a medical library, an anatomical museum, a medical society and prize medals for essays to improve medical science".

In 1770, Ward married his first wife, Ann Molineux (d.1779). In 1807, he married Alicia Darrow, having had two sons in between by an unknown woman while living in London. Ward's only legitimate son to survive to adulthood was his eldest son. In reference to the legitimacy of his two younger sons, Ward's son-in-law, Robert Bentham, wrote: "My nephew (is) the only surviving Son of Nicholas Boylston (now deceased) the eldest Son (indeed the only lawful Son) of Ward Nicholas Boylston…. I pass over the doubt which exists & has for many years existed, as to the marriage of the present Mrs (Alicia) Boylston (the styled widow of Ward Nicholas Boylston) or the legitimacy of her children. When I first became personally acquainted with the family she went by the name of Davis. All her elder children went by the name of Davis…. The fact was notorious in the neighborhood". Nonetheless, the two younger sons were brought up with every privilege.