William Duer, of New York; Member of the Continental Congress 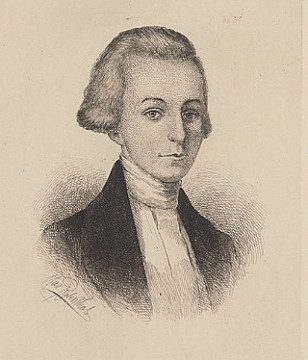 Born in Devon, England, to a family made wealthy through their sugar plantations in Antigua, he was educated at Eton College. He briefly served as aide-de-camp to Lord Clive in India before spending a few years managing his inheritances in Antigua. He came to New York in 1773 and bought up large tracts of land around Albany, entering the lumber industry. Siding with the Patriots, he was elected a Member of the Continental Congress and served as assistant secretary in the Treasury under his friend, Alexander Hamilton. His business activities while serving in the Treasury eventually came under scrutiny and unable to satisfy his creditors, he was sent to debtors prison in 1792. He was never released. The extent of his bad business practices (always borrowing and never repaying from an increasingly large and influential circle of New Yorkers, eg. Walter Livingston) set off the first financial panic in post-colonial New York City. He died disgraced after seven years in prison, but nonetheless remains the father and ancestor of many of New York's most distinguished names. He married Lady Kitty Alexander, daughter of Lord Stirling, and they were the parents of eight children.