Built in 1883, for John W. Field (1815-1887) and his wife Eliza Peters (1820-1897), a niece of Nancy Bingham, a famous beauty and Revolutionary America's leading society hostess. Having lived in Philadelphia and spent ten years in Europe, the Fields belonged to an international social set and were close friends with many of the leading literary and artistic names in both America and England. Having decided to retire to Washington, they built their new home on the northwest corner of New Hampshire Avenue and O Street, N.W., just south of Dupont Circle. Designed in the Colonial-Revival style by local architect Robert I. Fleming, it is believed to have been the first mansion built in that style in Washington. But, it became better associated with its third owners, George and Phoebe Hearst, who transformed it into the mansion seen in the photos....
zoom_in 13 images 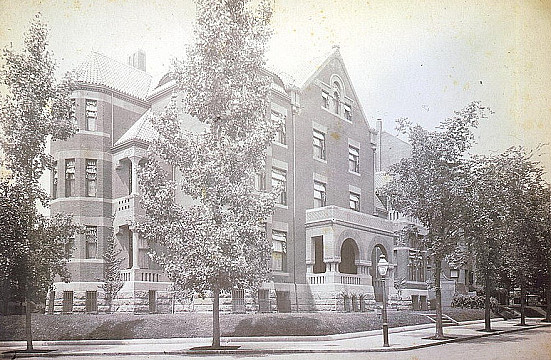 John Field died just four years after the house was built and in the same year his widow sold the house to the new U.S. Secretary of the Treasury, Charles S. Fairchild (1842-1924) and moved to New York. At about the same time she donated her husband's 85-piece art collection to the Williams College Museum of Art in Williamstown, Massachusetts.

Secretary Fairchild and his wife, Helen Linklaen, lived only two years here and at the end of President Cleveland's second term in office they returned to Mrs Fairchild's ancestral home, Lorenzo, in Cazanovia, New York. That year (1889), the Fairchilds sold the mansion to the U.S. Senator from California, George Hearst, and his wife, Phoebe.

"My Husband... So Near to being an Infidel it makes me Shudder"

Having left Missouri for California during the Gold Rush, Hearst became a multi-millionaire and his company was the largest private mining firm in the United States. The quick-witted, tobacco-spitting Senator was popular but his education - or lack thereof - quickly came under scrutiny in the capital: "My opponents say that I haven't the book learning that they possess. They say I can't spell. They say I spell bird, b-u-r-d. If b-u-r-d doesn't spell bird, what in hell does it spell?" Even his wife - an enlightened and sophisticated schoolteacher 20-years his junior - recorded in her diary: "My husband is not a member of any church and comes so near to being an infidel it makes me shudder".

Employing another local architect, Harvey L. Page, the Hearsts transformed their new home from both within and without. They gave it a Romanesque facelift and enlarged it significantly so that on completion it contained 32-bedrooms and 22-bedrooms plus reception rooms. If Hearst's education was going to be questioned, his success and business prowess would now speak for themselves. Phoebe on the other hand took a different, more measured approach to winning over Washington society: rather than holding large, ostentatious parties to engage in superficial conversation, she preferred to host smaller, intimate gatherings and sponsored talks on thought-provoking subjects.

A Leader in Her Own Right

George died in office just two years later (1891) and left Phoebe as sole heir to his $19 million fortune plus all his property and vast landholdings. She continued to live in Washington for another decade during which time she became a leader of society in her own right and her musicales, "were simply the best shows in town". They were always strictly limited to no more than 50-guests and attracted performances from the biggest names in opera, music and theater. She used these events to raise money and awareness for the many charities and philanthropic activities in which she was involved.

From Private Home to Public Space

In 1902, Phoebe sold up and and moved permanently to California, dividing her time between San Francisco, her ranch, Hacienda del Pozo de Verona, and her fairytale castle in the mountains, Wyntoon. From then until 1925, her former home in Washington served as the Italian Embassy. It then proceeded to fulfil several different roles: a hotel, an Officer's Club (1940-1945), the Headquarters of the Russian Bible Society (1948-1958), and then the Cathedral Club Residence up until it was demolished in 1964. The land on which it stood is now part of One Dupont Circle.

American Dreams: American Art to 1950 at the Williams College Museum of Art By Nancy Mowll Matthews

Phoebe Apperson Hearst: A Life of Power and Politics By Alexandra M. Nickliss