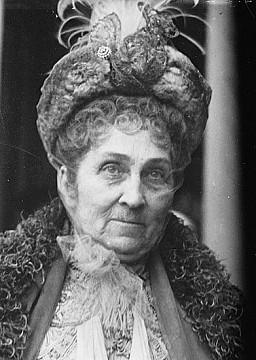 She was born in Missouri and became a school teacher before marrying her distant cousin who was twenty years her senior, George Hearst. Phoebe gained a reputation as a progressive, forward-thinking philanthropist, particularly in relation to children, and is perhaps best remembered for creating the Parent-Teacher Association in the 1880s. She worked closely with Benjamin Ide Wheeler, President of the University of California, as the university's chief benefactress and fundraiser for a period of 20-years. She was also Vice Regent of the Mount Vernon Ladies' Association from 1889 to 1918 and donated generously towards improving George Washington's home, Mount Vernon, and furnishing it with objects he'd owned. When her husband died in 1891, he left his entire $19 million fortune and all his property to her. She divided her time between their mansion in Washington, 1400 New Hampshire Avenue, and her ranch in California, the Hacienda del Pozo de Verona, before moving to California permanently after 1902 where she kept a house in San Francisco and built the fairytale castle, Wyntoon. Between 1891 and her own death in 1919, she spent $21 million on various charities. She left one son, William Randolph Hearst.

Image Courtesy of the Library of Congress