Built in 2010, for Ralph Lauren in the style of a Beaux-Arts mansion to house his second flagship store directly across the street from his first, 867 Madison Avenue. It was designed by the Architects Weddle Gilmore who have designed several stores for the Ralph Lauren, notably the one on Avenue Montaigne in Paris which has a very similar staircase. The 22,000 square foot building, faced in limestone, replaced a bland two-story 1951 structure that had taken the place of the Ruth Brown House, home to leading society hostess and one of the most prolific house builders in Gilded Age history, the indomitable Mrs Alva Vanderbilt. In reference to Ralph Lauren's hark back to Gilded Age splendor - inspired by the likes of the James B. Duke House - Mayor of New York Michael Bloomberg was quoted in vogue.com as saying, "we can no longer say 'They don't build them like this anymore'".
zoom_in 1 images 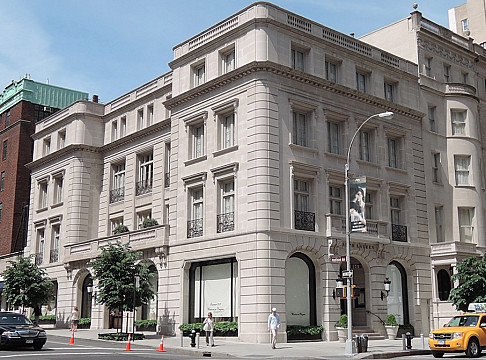