Completed in 1898 for an eccentric, blue-blooded but cash-strapped widow, Mrs Gertrude (Rhinelander) Waldo (1842-1914). She never lived here and even when debt caught up with her she flatly refused to sell, preferring to admire it from her home across the street. Standing on the south-east corner of 72nd Street, this was one of the finest, and is now one of the very few remaining "chateaux" from New York's Gilded Age, the likes of which were once a relatively common sight on the streets of the upper east side of Central Park. Having been allowed to fall into an increasingly bad state of repair by a succession of different owners who leased it for commercial purposes, Ralph Lauren took up the lease in 1983. He carried out a vast renovation project, bringing it back to its former glory to become his first flagship store in New York...
zoom_in 3 images 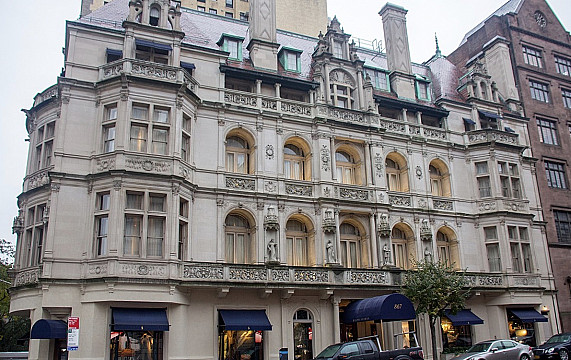 The Rhinelanders were among the oldest of New York's landowning families. Gertrude's ancestor, Philip Jacob Rhinelander (1686-1778), acquired significant amounts of land  in Manhattan and around Yorkville. At roughly the same time, the family fortune was again increased through their sugar business, Rhinelander & Sons, and when Gertrude's father, Bernard, died in 1844 he was described as "among the richest of the rich" in New York. Gertrude was a first cousin of the mother of the celebrated author, Edith Wharton.

Gertrude herself married Frank Waldo, a stockbroker, and no doubt expected a continuation of the easy life of someone who had both wealth and pedigree. But, Frank's involvement in the financial crash of 1873 and death five years later left Gertrude with significant debts. The truth was, Gertrude could ill afford to build a chateau, but she did.

Something "Quite Unique in Design"

Having been widowed in 1878 and left in straightened circumstances, four years later Mrs Waldo received a welcome inheritance of real estate valued at about $360,000. That same year, she promptly purchased the land on which her chateau now stands and presented plans for something "quite unique in design," but nothing came of it. Instead, she moved in with her unmarried sister, Laura, in a row house across the way on 72nd Street.

By 1893, reinvigorated, Mrs Waldo commissioned Kimball & Thompson to design her something worthy of anything put up by an Astor or a Vanderbilt, and particularly to rival the haughty Mrs Vanderbilt's Petit Chateau on Fifth Avenue. The result was a limestone chateau built in the style of the French Renaissance, typical of those found along the banks of the Loire Valley. Kimball & Thompson had entrusted the project to their new award-winning English protégé, Alexander Mackintosh (1861-1945).

An Englishman in New York

Fresh off the boat from England, Mackintosh had cut his teeth working in his native London for the celebrated Sir Aston Webb who put the austere facade on Buckingham Palace among other projects. Indeed, what Mackintosh designed for Mrs Waldo wouldn't look at all out of place in Knightsbridge or Kensington, but more particularly the design bore several similarities to the Webb-designed Victoria Law Courts in Birmingham. The carved-stone, diamond-patterned chimneys were inspired by the Chateau de Chambord and the carved balustrades are reminiscent of the galleries at the Chateau de Blois.

Work began in 1894, and it took four years to complete. During this time, Mrs Waldo based herself at the Savoy Hotel in London and made use of her time touring - or perhaps more aptly "shopping" - around Europe. She sent back crates of classical statuary, fine art, antique tapestries and furniture to New York where they were carefully deposited in various completed rooms and hallways ready to fill the mansion.

The house stands four stories high and the immense ballroom was lit by 1,000 light bulbs. Because of the slope on which it was built, the ground floor provided a few reception rooms, but was mainly given over to kitchens and servants quarters. The second floor contained the principal reception rooms: the drawing room, salons and dining room. The entire third floor was intended for Gertrude's sleeping and private rooms while the fourth floor was for further guest rooms and servants quarters.

By 1908, her husband's debt had caught up with her and so a buyer had been found for the house. But with just the papers left to sign, she mused, "I don't think I'll sell," and with that, stood up, and walked out of the meeting! Perhaps because the sale had made the newspapers, by 1909 criminals had cottoned onto the treasures that lay within, still all neatly boxed up, and the house was broken into and looted four times that year.

By 1911, Gertrude was forced to deed the house to her sister to avoid her creditors taking it, but the following year the house was eventually foreclosed by the bank. By then, "broken windows and partially broken stonework suggested the appearance of some venerable ruin". In 1914, Gertrude died at her sister's house, still owing $150,000.

As soon as Gertrude was dead, the bank that had foreclosed on the house stepped up their efforts to have it demolished and an apartment block put up in its place. The City ruled that for zoning purposes it could only be made use of a single private home. It wasn't until 1921 that the "white elephant" was finally occupied when the antique dealers Olivetti & Co., leased the lower floors from then owners, the Fred T. Ley Company.

In 1928, Olivetti purchased the house and for a long time its name could still be seen above the door on the north facade. The shops on the ground floor then included "Rhinelander Flowers" which was Manhattan's most prestigious flower shop, and featured in the TV series "Mad Men". Olivetti's sold up in the 1959 and from then it passed through the hands of several owners, but all the while falling into further disrepair. Nonetheless, in 1976 it was made a New York City Landmark and in 1980 it was added to the U.S. National Register of Historic Places.

In 1983, Ralph Lauren acquired the leasehold and carried out a huge restoration program thought to have cost in the region of $15 million. On completion in 1986, the house once again shone and became Ralph Lauren's flagship store in New York. It remains the flagship store for menswear while from 2010 womenswear moved to their second flagship store directly opposite at 888 Madison Avenue. It last changed hands in 2005 for a staggering $80 million, having been purchased for 'just' $6.4 million in 1984 - Mrs Rhinelander would have been forgiven for stirring in her grave that night!

Seeking New York: The Stories Behind the Historic Architecture of Manhattan - One Building at a Time By Tom Miller

House of Thieves: A Novel By Charles Belfoure