Built from 1848, for Alexander Mitchell (1817-1887) and his wife Martha Reed (1817-1902). As Mitchell's fortune grew, so did Milwaukee's prosperity, and so did his house. It started life as a stately block and then became an elaborate Italianate villa before its final transformation in 1872 to the sumptuous Second Empire mansion seen today. Since 1848, it has been at the center of Milwaukee society. From being the home of Wisconsin's wealthiest family (and childhood home to the "Father of the U.S. Air Force" Billy Mitchell) it became the home of the Deutscher Club in 1895 and apart from changing its name to the Wisconsin Club during World War I, it hasn't looked back...
zoom_in 4 images 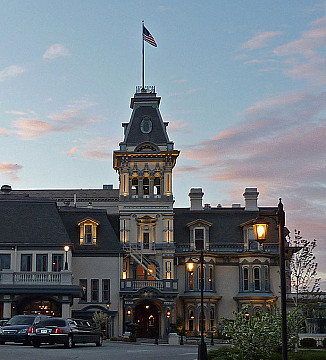 In the 1830s, the small Scottish village of Old Deer in Aberdeenshire (present population 132) was fortunate to have among its residents one George Smith. He travelled out to Illinois and Wisconsin in 1833 and when he returned he set up the Scottish Illinois Land Investment Company with his cousin, Alexander Anderson. He went back out to America, and in 1839 he brought over another promising young Anderson cousin, Alexander Mitchell, who he packed off to Milwaukee with a carpet bag stuffed with $50,000 in cash and instructions to set up the Wisconsin Marine & Fire Insurance Company. Nine years later, that young man built this mansion and as his fortune grew, so did his house. George is remembered as George "Chicago" Smith and both men died multi-millionaires.

Old Deer also supplied Milwaukee with Mitchell's cousin, John Johnston, who became his Vice-President at the the Wisconsin Marine & Fire Insurance Company and in 1888 paid $40,000 for the construction of Milwaukee's first emergency hospital that was duly named for him. Alexander Mitchell expanded his influence from banking into railroads etc., and he represented Wisconsin at Congress for two terms. His only son, John, continued where he left off and built the magnificent Mitchell Building on East Michigan Street; and, John's son, Billy Mitchell, is regarded as the "Father of the U.S. Air Force".

Over a period of ten years from 1848, Mitchell gradually expanded his home between 9th and 10th Street on Grand Avenue, buying up the adjoining properties on the same block. In 1859, he remodelled his home in the fashionable Italianate style and in 1872 he added wings either side of the center block, fitting bay windows and enlarging the porch.

By 1870, an iron-fence was put up to surround the city block-sized estate, allowing passers-by a small glimpse of the landscaped lawns (with more than 5,000 different species of plants, including 800 varieties of roses) and ornate outbuildings that housed vines, pineapples, and tropical specimen plants.

In 1876, Mitchell employed the architect Edward Townsend Mix (1831-1890) to redesign the Italianate mansion in French Second Empire style, as seen today. Artists from Europe were employed to sculpt the elaborate hand-carved mahogany panels as well as designing the stained glass windows, plaster and inlaid tiles. The Grand Staircase in the mansion's East Hall with its twenty-four lion-heads took one artisan seven years to build!

Mix's new plans enlarged the house which now included a ballroom, library and conservatory complete with a small stream, palm trees and exotic plants. The ceiling of the Oriental Room was covered with over 1,600 hand-carved pansies, while the Moorish Room is covered in embossed leather panels with red, blue and gold arabesques.

By the 1880s, the Mitchells were dividing their time between their mansion in Milwaukee and their winter home in Florida, Villa Alexandria. When Alexander died in 1887, his widow moved all-but permanently to Florida and their only son, John L. Mitchell, moved his young family into the mansion. However, finding it too large for purpose even for his large family, John leased it for $2,000 a year to the Deutscher Club who had been looking for a suitably opulent home since 1891 when their original clubhouse burned down.

In 1898, the club purchased the mansion from the Mitchell family for $165,000. In 1905, the conservatories and greenhouses seen in the main picture were replaced by a new wing containing a suitably large club dining room, and equally long bowling alleys! Most of the principal reception rooms such as the Moorish Room remained untouched, but the upper floors were remodelled to allow for more bedrooms, adjusting to club life.

Billy Mitchell: Founder of Our Air Force and Prophet Without Honor By Emile Gauvreau & Lester Cohen

Milwaukee Then & Now By Sandra Ackerman

She's Not There By Marla Madison