Built from 1096, for the de Vesci family, Barons of Alnwick (pronounced "Annick"). Situated by the bridge that spans the River Aln it traditionally served as a fortress from which to defend England's northern border from marauding Scots. It was dubiously acquired in 1309 by Henry Percy (1273-1314) 1st Baron Percy, who began a major restoration of the castle. Since then it has remained the ancestral home of the Percys who became the Earls (1377) and then Dukes (1766) of Northumberland, making it the second largest continuously occupied castle in England after Windsor Castle....
zoom_in 12 images 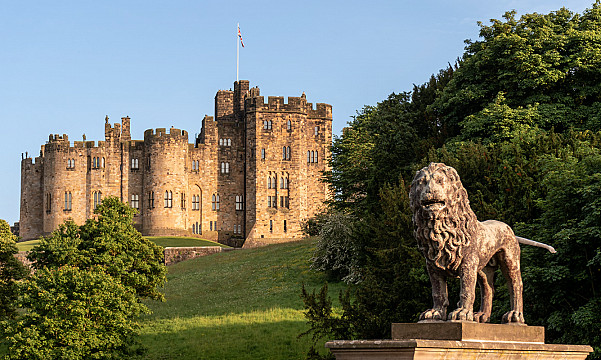 Over the years it has been expanded and altered by successive owners and currently contains 150-rooms spread out over 217,800-square feet. Aside from the present Duke's private quarters, it is open to the public and is perhaps best recognized for starring as Hogwarts in the Harry Potter movies the Sorcerer’s Stone and the Chamber of Secrets. It hosts a number of Harry Potter-related tours and activities, eg. Broomstick Training, and is also supposed to be haunted, notably by the "Alnwick Vampire" in the 11th Century.

Alnwick Castle has long been a popular filming location and aside from Hogwarts it has also played the role of Brancaster Castle in Downton Abbey's Christmas Specials (2015 & 2016); and, the Library, Inner Bailey, Lion Bridge and Bowburn as well as various shots of the exterior were featured in Transformers: The Last Knight (2017). Other major films in which it has played a role include The Virgin Queen (2005); Elizabeth (1998) starring Cate Blanchett; A Knight in Camelot (1998) starring Whoopi Goldberg; Star Trek: The Next Generation (1993); Robin Hood: Prince of Thieves (1991) starring Kevin Costner etc.

Alnwick was home to the 1st Earl's most famous son, Harry 'Hotspur' (1364-1403), one of Shakespeare's most popular characters and the man from whom the football club Tottenham Hotspur F.C. takes its name. In 2010, his statue was unveiled here.

The castle walls are comprised of various interconnecting structures dating back to the Medieval period. The southern range of the outer ring houses the International Study Programme for Saint Cloud State University in Minnesota. The castle was also the inspiration behind Grey Towers Castle in Pennsylvania that is now part of Arcadia University and which in turn may have inspired nearby Lindenwold Castle. Alnwick is one of the most visited castles in England, attracting roughly 200,000 visitors a year.

Harry Potter: Magical Places from the Films: Hogwarts, Diagon Alley, and Beyond By Jody Revenson

The Lions of the North: The Percys & Alnwick Castle By Ralph Percy, 12th Duke of Northumberland

Harry Potter and the Sorcerer's Stone By J.K. Rowling