Completed in 1896, for William Welsh Harrison (1850-1927) and his wife, Bertha Marie Whyte (1857-1933). Situated off Easton Road slightly south of the intersection with Church Road, at 66,381-square feet (not including its since demolished conservatory), it is the 14th largest historic house in the States, just behind Lynnewood Hall. It was the first major commission of one of the most widely admired architects of the Gilded Age, Horace Trumbauer, and his work here proved to be the spring board to his success. Loosely inspired by elements of Alnwick Castle in England that starred as Hogwarts in the first two Harry Potter movies, today it is part of Arcadia University and the original bedrooms on the top floors are now student accommodation....
zoom_in 20 images 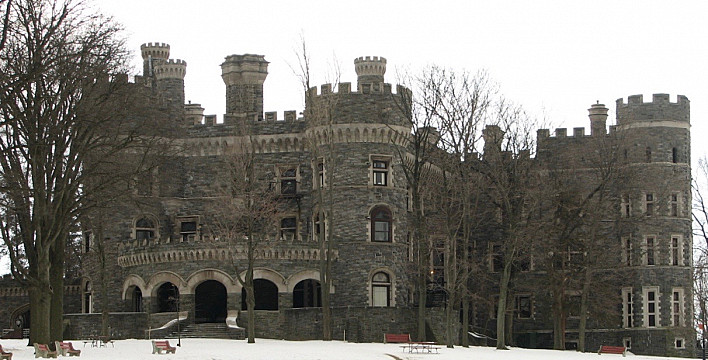 William W. Harrison and his three brothers established the John Harrison Laboratory of Chemistry at the University of Pennsylvania in memory of their grandfather, the first manufacturing chemist in the United States. Their father, President of the U.S. Board of State Charities, set them up as the co-owners of the Franklin Sugar Refinery in Philadelphia. It became one of the largest of its kind in the world, refining 90% of America’s sugar, and they sold it 1891 for $10 million. William was remembered as a tireless worker with a natural ability for people management and it was at his instigation that an emergency hospital was built for the workers within the factory walls.

When Harrison was 31-years old (1881), he purchased Rosedale Hall from J. Thomas Audenried with 183-acres in Cheltenham Township. In 1891, Horace Trumbauer was 23-years old, the son of an unremarkable salesman with no social connections and an architectural practice in Philadelphia that was just two years old. His first commission had been to build several middle class homes near Germantown as part of a development project for the legendary financier, Anthony J. Drexel. The Drexels and Harrisons moved in the same circles and it is assumed that Drexel had recognized Trumbauer's raw talent and suggested his name to Harrison when he wished do some work to Rosedale.

The Phoenix from the Ashes

Having just sold the Franklin Sugar Refinery, the now 41-year old Harrison found himself worth something in the region of $3 million. He hired Trumbauer to, renovate and expand Rosedale Hall ("encasing and preserving the rooms of the old Rosedale"), design a stable and carriage house complex, and add a gate lodge and power plant. Trumbauer succeeded admirably in his task but just two years later Rosedale burned to the ground. The fire was noticed at one o'clock in the morning of January 14, 1893, while the temperature outside was 2°F (-16.7 Celsius). The Harrisons barely managed to escape across the snow before being forced to huddle in the newly built stables until clothes could be found for them.

Harrison wasted no time in rehiring Trumbauer and plans were drawn up for a castle loosely inspired by - but not directly copied from - Alnwick Castle that dates back in parts to the 11th Century. Grey Towers Castle measures a massive 225-feet across with a depth of 185-feet. Built with gray stone quarried from nearby Chestnut Hill it is trimmed with Indiana limestone. Its six towers of varying sizes are finished with Gothic-style battlements and the facades are interspersed with gargoyles, other traditional Gothic architectural features, and a carved copy of the Harrison coat-of-arms. Said to have been built without a single nail, construction costs ran to $250,000. After it was finished, it was considered to be the third largest house in the country and seeing it complete Harrison wrote, "the name Grey Towers seemed more appropriate than Rosedale Hall".

To the north and east, the 41-room (not including servant's rooms) castle is surrounded by terraces of marble mosaic bordered by stone balustrades. The south front stands over an open court to which the conservatory with its "great glass dome" was originally attached. The court spills out to what was the carriage drive 10-feet below via the curved, double stone staircase. Trumbauer's original buildings all survived the fire: the stables/carriage house complex is now known as Murphy Hall; the gatehouse is home to the Blankley Alumni House; and the powerhouse is today's Spruance Art Gallery.

The interiors were executed over a period of five years following a principally French theme, ranging in styles from the Renaissance to Louis XV. The interior design firm used was William Baumgarten & Co., of New York. From 1893, they became the first producers of Aubusson-style tapestries in America and Grey Towers provided the perfect backdrop from which to showcase their new product - Harrison spent $50,000 alone on their tapestries which were prevalent everywhere. Very quickly, Baumgarten's were employing 40-artisans to supply the collections of the Vanderbilts, Whitneys, Rockefellers etc. Elsewhere, the stonemasons and woodworkers who worked on both the interiors and exteriors were said to be Europeans who had recently settled at nearby Edge Hill.

On entering via the east-facing Porte Cochère, the massive mahogany Great Hall towers up the full three stories of the castle to a coffered, barrel-vaulted ceiling along the lines of that at the Château de Chambord. The twin Caen stone fireplace mantels - as well another in the Ballroom - are modelled after those in the Salle des Gardes in the Francois I wing of the Château de Blois, except here the Royal emblems have been replaced with fleurs-de-lis and the coat-of-arms granted to Harrison’s father. At the opposite end of the Great Hall, directly ahead facing the entrance, mahogany stairs lead up to a sunken landing from which a pair of glass doors slid open onto the oak-panelled Billiards Room.

The principal room coming off the Great Hall on the left (on what is the south side of the castle) is the walnut-panelled Dining Room which features columns and caryatids reminiscent of those at the Château de Fontainebleau. At the other end of the room, glass doors once opened up into a since demolished circular conservatory and leading off to the west was the Breakfast Room and beyond that kitchens etc. On the other side of the Hall directly opposite the Dining Room is the Drawing Room, better known as the Rose Room and decorated in the style of Louis XV. A pair of sliding doors in the center of the room open onto the Ballroom, also known as the Music Room or Mirror Room.

The Mirror Room was ordered in France and shipped to America along with the craftsmen needed to assemble it. Its Renaissance-inspired ceiling is painted showing the four seasons as women and the fireplace depicts Euterpe, the Greek Muse of Music. The remaining principal reception room was the walnut-lined Library that is today the office of the college president. The bedroom suites were on the second floor with their own dressing rooms, boudoirs, fireplaces and marble baths. Despite the air of antiquity prevalent throughout the house, it was fitted with electricity and every modern convenience.
Grey Towers Today as Arcadia University

The Harrisons moved in from 1896 but the interiors were not finished until 1898. The family lived and entertained at Grey Towers for thirty years before Harrison died here of a heart attack in 1927. He had recently appeared in court as the plaintiff against Francis Ralston Welsh, his former broker, friend, and social intimate who had defrauded him of $239,000 over a ten-year period. The strain of the situation was said to have played a large part in his demise. Two years later (1929), his widow sold Grey Towers for $712,500 to the all-girl's Beaver College as one of their two campuses. In 1962, they consolidated all their activities to Grey Towers - which was declared a National Historic Landmark in 1985 - and its 76-acre campus. From 2001, the college was renamed Arcadia University.

Today, the ground floor of the castle is home to several of the university's administrative offices and conference/events rooms. The upper two floors have been sympathetically converted into suite-style dormitories for select freshmen, giving them an opportunity to experience life here as the Harrisons had done - with perhaps an added ghost or two.