Built from 1890, for Dr Richard Van Zeelust Mattison (1851-1936) and his first wife, Esther Dafter (1855-1919). Situated along Bethlehem Spike between Highland Avenue and Lindenwold Terrace, this was the winter seat of America's "Asbestos King". It started off life as a Chateauesque mansion but was enlarged and remodelled in 1912, popularly said to have been redesigned to resemble elements of Windsor Castle. It was surrounded by 50-acres of landscaped pleasure gardens with its own 6-acre man-made lake, but the Great Depression dethroned the king and he was forced to sell the estate months before his death in 1936. It was acquired by the Sisters of the Holy Family of Nazareth and became known as St. Mary's Villa, a home for abused youths. Today, the estate is being entirely developed but the castle remains as a senior living facility....
zoom_in 4 images 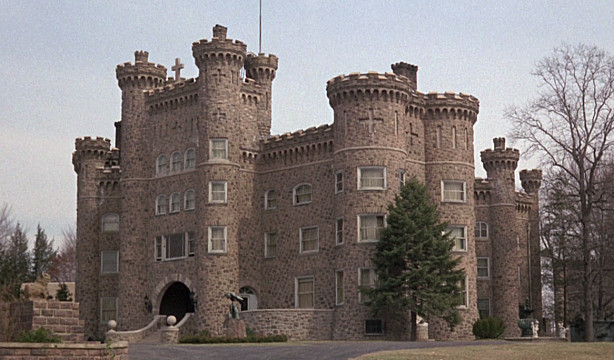 Henry Keasbey met Richard Mattison when they were students at the Philadelphia College of Pharmacy. Having witnessed the devastating effects of malaria in post-Civil War New Orleans, Keasbey determined to find a cure and partnered up with his old classmate who was the business brain behind their ventures. Keasbey & Mattison continued to produce medicines, but they quickly perfected a technique that by 1914 saw K&M become the world's largest manufacturers and suppliers of asbestos building products.

In 1881, "Doc" Mattison moved the headquarters of Keasbey & Mattison to Ambler from Philadelphia, breathing new life into the 13-year old town just as the milling industry was collapsing. He brought over African-Americans from West Virginia, and further laborers from Germany, France, Hungary, and Poland, but perhaps most notably, hundreds of Italian stonemasons and builders. Mattison built 400-homes here that left no-one in any doubt as to the town's social strata: turreted detached mansions were built for executives; comfortable duplexes for superintendents; and, row houses for factory workers.

Mattison's castle dominated a hill at the center of the town from which he could survey all that was his. Mattison wasn't just the "Asbestos King," he was the King of Ambler, and life here - not altogether dissimilar to George Pullman's company town outside Chicago - was about as feudal as it got. Aside from the factory he built and the houses he rented to his employees/subjects, he also owned all the businesses on which they relied from utilities to banks, not to mention medicine and building supplies. While he indulged them with a library, church, and opera house, he was always able to ensure that none of his bills ever went unpaid by simply docking any pay cheque by the required amount owed.

The castle started life as "Lindenwold," a 24-room mansion with a distinctly German feel to it. But by 1912, the aspirations of the Asbestos King - the same man who named his youngest son "Royal" - had become decidedly loftier. Whether Mattison chose to remodel his home along the lines of Windsor Castle - as is most popularly alluded to - or another castle nearby is a matter of dispute. Mattison's business partner retired to Europe in the 1890s and settled in England from the early 1900s, so it is therefore very possible that Mattison became acquainted with Windsor Castle during that time. In an article for the Society of Architectural Historians, George E. Thomas has suggested that its inspiration lay considerably closer to home: Grey Towers at Glenside is located just seven miles southeast of Ambler and as the man who built it was also an industrialist and the same age as Mattison, it is almost a given that he and Mattison knew one another well.

In all reality, Lindenwold Castle bares at best only a passing resemblance to the odd part of the 1,000-room Windsor Castle; and, their 40-room size aside, its similarity to Grey Towers stops at the fact that it too takes its inspiration from an English medieval castle: the 150-room Alnwick Castle is perhaps better recognized today for starring as Hogwarts in the Harry Potter movies, the Sorcerer’s Stone and the Chamber of Secrets.

Lindenwold Castle was the creation of Milton B. Bean, the same architect commissioned by Mattison in 1898 to build Ambler's magnificent Gothic-Revival Episcopal church among various other buildings. Mattison's new home was almost doubled in size to 40-rooms; the exterior was entirely refaced with stonework from the K&M factories; and, its towers were accentuated with crenellated ramparts. German craftsmen were responsible for much of the interior woodwork while Italian masons sculpted the stonework.

The main entrance to the estate (aside from two more which also had their own gatehouses) can still be seen at Bethlehem Pike and Lindenwold Terrace, although missing the original top half of what had been a battlemented design. The wrought-iron gates between the remaining stone pillars were designed by an artist in Germany but executed by local tradesmen on site in Ambler. Inside, the magnificent gardens were laid out over 50-acres and included winding, picturesque bridle paths, marble statuary, sunken gardens, a 6-acre man-made rectangular lake with its own gazebo, and ornamental stone bridges.

Beautiful as his estate was, it was solely for the pleasure of "the king" and the stone walls that surrounded the estate were patrolled day and night by guards with dogs. Flowers from the gardens brightened the castle's interior while produce from the gardens contributed to the sumptuous dishes served up in its kitchens. Mattison's preference was for only the freshest flowers in his home. Once they began to lose their lustre (in what he supposed was a magnanimous gesture) he would have his staff lay out wagonloads of all the rejected and unwanted plants and flowers from his greenhouses on the street to be eagerly gathered up by the townsfolk as he watched on silently from afar.

The first Mrs Mattison died in 1919 at their summer house, Bushy Park (otherwise known as Beach Cliffe) in uber-fashionable Newport. Her death had been brought on by an acute allergy from which she could only find relief if seated in the castle's ice house, wrapped up in furs. Just nine months later, the grieving widower put several noses out of joint when he remarried her friend, a divorcée who was not only the best part of a decade younger than the first Mrs Mattison, but said to be decidedly more glamorous. His sons were furious and although both lived in Ambler, they now refused to visit the castle.

The absence of the "king's" heirs suited the new Mrs Mattison just fine - she'd never been a fan of entertaining others at the best of times. Even when a car accident left her wheelchair-bound and for two years confined within the castle's asbestos-insulated walls, rather than be entertained by visitors, she preferred to entertain herself. She whiled away the hours on the end of a pair of powerful German binoculars that from the castle's top floor gave her a more than insightful view into the lives of her husband's subjects.

Meanwhile, the young "princes" had been bestowed with the honorific titles of Vice-Presidents of Keasbey & Mattison. But, it was no secret in the small town that the "king" - and to be fair, everyone else - considered them utterly incompetent and their father strove hard to avoid involving them in any business decisions. The eldest, Richard Jr., was an alcoholic who'd been rewarded by his father with a 70-acre estate half a mile north of the castle for divorcing his first wife that the king considered a "floozie". The heir apparent was particularly unpopular in Ambler where he had a reputation for rudeness and getting caught up in altercations with shopkeepers for refusing to pay his bills.

The Depression of the 1930s swiped the legs from under the American building industry and almost immediately K&M fell into a nose dive. Keasbey had managed to sell his 50% share just before the Crash of 1929 leaving Mattison as the sole owner. Just two years later (1931), the man who had been the business brain behind K&M was forced to relinquish the company to the banks. In 1934, K&M was sold to an English company and Mattison vacated the castle for a more modest home on Lindenwold Terrace. In January, 1936, the castle went too, sold for $115,000 to the Sisters of the Holy Family of Nazareth. By that November, a heart attack had ended the asbestos king's 55-year reign over Ambler.

St. Mary's Villa and the Remnants of a Kingdom

The Sisters converted the castle into an orphanage, adding a crucifix to its ramparts and renaming it St. Mary's Villa for Children and Families, which was soon shortened to just St. Mary's Villa. Unlike so many other Gilded Age mansions taken over by religious institutions, the Sisters retained not only all the original interior elements - stained glass windows, gold-leaf ceilings, marble fireplaces etc. - but also the magnificent statue-strewn gardens. In 1966, the castle was used in exterior shots to portray an all-girls Catholic boarding school run by nuns in the comedy movie The Trouble With Angels.

The castle and gardens seemed destined to remain in a time warp until the Sisters were forced to sell in 2013. The castle was added to the National Historic Register the following year before its 50-acres of gardens were flattened to allow for 104 luxury homes that will surround the castle - now an oasis in a sea of modern development. It is now a senior living facility divided into 156 independent living units. Nonetheless, if the second Mrs Mattison took her binoculars to the next world, she'd be heartened to know that 80% of the houses built in Ambler by her husband remain standing and lived in today.

The Trouble with Angels By (Starring) Rosalind Russell & Hayley Mills

Unto the Sons By Gay Talese