Completed in 1818, for George Washington Parke Custis (1781-1857), not as a home, but as a memorial to his step-grandfather. He was the step-grandson and principal heir of the first President of the United States, George Washington. He grew up at Mount Vernon and although he was the financial heir of the former President, Mount Vernon was left to the President's nephew, Bushrod Washington, who refused to sell to Custis. Custis moved to the 1,100-acre "Mount Washington" plantation that had belonged to his father. In 1803, he and architect George Hadfield began work on "Arlington House" - the first true example of Greek-Revival architecture in the U.S....
zoom_in 4 images 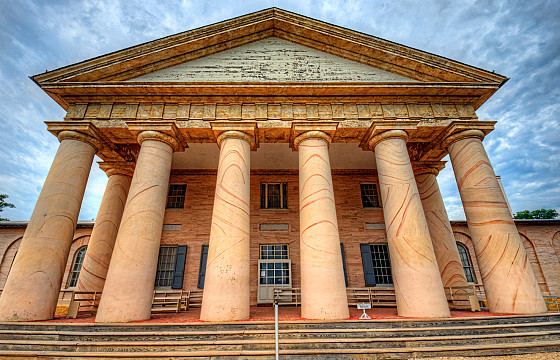 Arlington contained many heirlooms and curios from Mount Vernon, but the interior was only 'domesticated' when it became the home of General Robert E. Lee through his marriage in 1831 to Custis' only child to reach adulthood, Mary Custis.

Arlington was initially seized by the Union Army at the outset of the Civil War for its strategic importance overlooking the Potomac, and its proximity to Washington D.C. In 1863, it was confiscated by the government for non-payment for taxes and "Freedman's Village" was built there as a home for slaves escaping from the south. In 1864, another portion of the plantation was requisitioned for use as a military burial ground.

At the conclusion of the Civil War, General Lee's eldest son, George, sued the government and in 1882 reclaimed title to Arlington. However, owing to the fact that thousands of soldiers were buried there, he accepted the government's offer of $150,000 and the property became the Arlington National Cemetery - a sobering reminder of division.