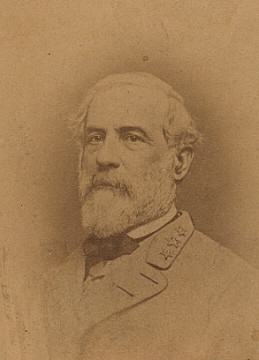 He was born at his family's ancestral home, Stratford Hall, in Virginia. He graduated from West Point Academy as a 2nd Lieutenant and joined the Engineers. He distinguished himself in the Mexican-American War (1846-48) and fought in several major battles, often working closely with Ulysses S. Grant. He was appointed Superintendent of West Point Academy (1852-1855) before his promotion to second-in-command of the 2nd Cavalry Regiment in Texas, protecting settlers from the Apache and the Comanche. In 1859, he suppressed the attempted rebellion at Harper's Ferry and when Texas seceded from the Union and joined the Confederate States (1861), he returned north and Lincoln promoted him to Colonel of the Union's 1st Cavalry Regiment.

In April, 1861, to Lee's great sadness, Virginia seceded from the Union and though officials in Washington were quick to offer him a senior command to ensure he stayed with the Union, he replied: "I look upon secession as anarchy. If I owned the four millions of slaves in the South I would sacrifice them all to the Union; but how can I draw my sword upon Virginia, my native state?" After the outbreak of Civil War, he was made a General of the Confederate States Army. In 1862, he was given command of the Army of Northern Virginia and just 90-days later - with inferior numbers - he had run General McClellan off the Peninsula, defeated General Pope at the Second Battle of Bull Run, and moved the battle lines from 6-miles outside Richmond to 20-miles from Washington D.C.

An intercepted dispatch led to Lee's narrow but bloody defeat at the Battle of Antietam and he withdrew back to Virginia. Having had time to build strong defences, General Burnside's subsequent attack at Fredericksburg resulted in a disastrous defeat for the Union Army. General Hooker's superior numbers then attempted to defeat Lee at Chancellorsville, but Lee out-manoeuvred him and the Union Army suffered yet another embarrassing defeat, although this time the Confederates suffered heavy casualties and Lee lost his finest General, Stonewall Jackson. But, following on from victory Lee again pushed north, only to be defeated at the Battle of Gettysburg - a major strategic blunder.

Ulysses S. Grant now determined to finish Lee through sheer manpower and superior resources. Pinned against Richmond, Lee's army successfully repelled Grant's repeated attacks. In June, 1864, having got his army north of the James River and foiled a Union attack on Petersburg, Lee's army then entrenched themselves there, resulting in the almost year-long stalemate that was the Siege of Petersburg. In February, 1865, Lee was appointed General-in-Chief of the Confederate Armies, but the South was running out of manpower, depleted by casualties, disease, and desertion which enabled the Union to finally break through Petersburg. Lee fell back to Richmond and then tried to manoeuvre southwest to join the Army of Tennessee. On April 9, 1865, Grant surrounded him and he surrendered at Appomattox. The other Confederate Armies followed and the war was over.

Lee rejected calls for a campaign of guerrilla warfare, instead focusing his energies on reconciliation: "So far from engaging in a war to perpetuate slavery, I am rejoiced that slavery is abolished. I believe it will be greatly for the interests of the South". He also opposed immediate calls to build Confederate monuments: "I think it wiser not to keep open the sores of war, but to follow the examples of those nations who endeavored to obliterate the marks of civil strife, to commit to oblivion the feelings it engendered."

Lee was not arrested but he was indicted, lost his right to vote, and his home, Arlington, was converted into the Arlington National Cemetery as it remains today. He supported Andrew Jackson's plan for Reconstruction and encouraged establishing free public schools for the newly freed African-American population, but citing their lack of education at that point he opposed allowing them to vote. For himself, he had hoped to retire to a life of farming, but his national celebrity and his key role in healing the divide between the north and the south kept him forever active. To that end, he accepted the Presidency of today's Washington and Lee University (1865-1870), purposefully integrating students from the north. He was exceedingly popular and the students "fairly worshipped him".

In 1831, Lee married Mary Anna Randolph Custis (1808-1873). Her father, George Washington Parke Custis, was the step-grandson and principal heir of the first President of the United States, George Washington. They were the parents of seven children.

Clouds of Glory: The Life and Legend of Robert E. Lee By Michael Korda

Robert E. Lee and Me: A Southerner's Reckoning with the Myth of the Lost Cause By Ty Seidule

The Great Partnership: Robert E. Lee, Stonewall Jackson, and the Fate of the Confederacy By Christian B. Keller

A Sin by Any Other Name: Reckoning with Racism and the Heritage of the South By Robert W. Lee. Foreword by Dr Bernice A. King