Completed in 1833, for Captain James Hall, a Master Mariner. It is named for the family of James G. Blaine who lived here from 1862. Blaine was unsuccessful on three attempts to become U.S. President, including losing by a whisker (only 60,000 votes) to Grover Cleveland in 1884. His daughter gifted the house to the State after the tragic death of her only son to whom it had been given as a 21st birthday present. The house occupies a conspicuous position next to Maine’s Capitol Building and since 1919 it has been the official residence of the First Family of the State of Maine....
zoom_in 13 images 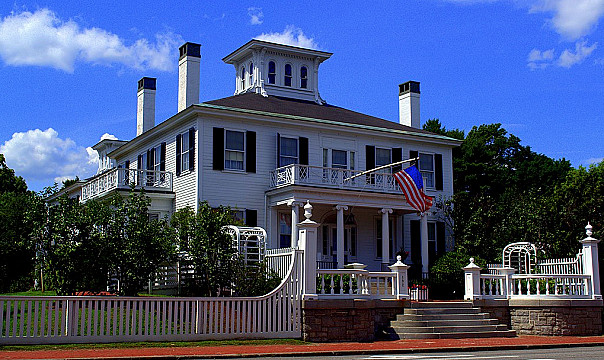 Captain Hall, originally of Bath, was a retired merchant seaman and privateer. On one occasion during the War of 1812, his ship - the America - captured and brought in an English merchant vessel with $10,000 of booty aboard, comprised of dry goods and silk. In 1830, having retired from the high seas with a small fortune, Hall purchased from James Child a plot of land along the Kennebec River measuring 9 rods north to south and 12 rods east to west (to which he later added one further rod) on which to build his new home.

In 1833, the Captain’s square, two story, hipped roof home – to which he later added an ell - was finished in the fashionable Greek-Revival, Federal style. His new home was now ready for his second wife, Frances Ann Davis, of Bath, who he married in 1834. It was entered through a door on the long colonnaded porch along State Street which opened into a large central hall. The ground floor contained a drawing room, dining room, kitchen and pantry. The staircase in the hall (that remains unchanged) led up to four family bedrooms.

On the death of Captain Hall, the property was left to his two sons. In 1843, they conveyed the property to their stepmother, and in 1850 she sold the house to Greenwood C. Child (1785-1855), a son of the original landowner. During his tenure at the mansion, Mr Child added the cupola and decorated the windows around it with flowers. In 1862, his widow sold the house to Mrs Harriet (Stanwood) Blaine (1827-1903) for the sum of $5,000 which had been given to her by her husband as a birthday present.

Harriet’s husband, James Gillespie Blaine (1830-1893), owed his career that saw him serve twice as U.S. Secretary of State to the early generosity of his wife's family. In 1869, they doubled the size of the house by adding a duplicate of the original to the ell and giving it an Italianate look. They referred to the two halves as “the old part” and “the new part”.

On the south side, an entrance led into “father’s library” which was next to the large octagonal billiard room completed circa 1872. Over the years, many changes were made to the internal layout of the house: three rooms were joined together to make one large Drawing room and a conservatory was attached to the ground floor. The “old part” now consisted of, “the Ash Room, the Blue Room, Aunt Susan’s Room, Alice’s Room, the Archway and the Irregular Room”.

Making a Habit of Entertaining Presidents

In August, 1873, U.S. President Ulysses Grant (1822-1885), accompanied by his daughter and two of his sons, stayed here as guests of the Blaines. On their last night, the Blaines held a ball in the President’s honor, building, “an elaborately constructed dancing pavilion gracefully trimmed with flags and streamers” specially for the occasion.

Senator Blaine died in 1893. Four years later in 1897, his widow rented their home to John Fremont Hill (1855-1912), the Governor of Maine who in 1902 played host at the house to Franklin Delano Roosevelt (1882-1945), the 32nd President of the United States. Mrs Blaine returned to the house in 1903 and died there a few months later. She left the property in varying shares to her surviving children and grandchildren.

In 1917, the late Mrs Blaine’s son-in-law, the distinguished diplomat Truxtun Beale (1856-1936), of Decatur House in Washington D.C., bought a majority share from his wife’s relatives and gifted the property to his son, Walker Blaine Beale (1896-1918), for his 21st birthday. One month later, the United States declared war on Germany and the patriotic Walker Beale, who was then studying at Harvard University, placed his new home at the disposal of the newly organized "Committee of Public Safety of Maine".

In September, 1918, Lieutenant Walker Beale was killed in action in France. His shares in the house reverted back to his mother, Harriet (Blaine) Beale (1871-1958), who now became the sole owner. In 1919, she donated the family home to the State of Maine in memory of her son: "It is my first and strongest desire, that this house, which has been a home for so many years and in which my son was born, shall be used and maintained as the official residence for the Governor of Maine... this would meet the approval of my dear son who devotedly loved his home, Augusta, and his native state. I leave the fulfilment of this trust to the good faith of the State for whose honor my son with many others gave his life."
The Governor's Residence

Prior to 1921, when Carl Elias Milliken (1877-1961), 51st Governor of Maine, became the first official resident, the state hired the architect John C. Stevens, of Portland, to redesign the mansion. At a cost of $186,648, the angled wing was added; the interior was redesigned; and, the mansion was painted white with green shutters. Other than a few further renovations and repairs carried out in the late 1950s, nothing was done with the mansion until it became necessary to rejuvenate it in 1988.

The Blaine House Restoration Fund was set up by Governor John Rettie McKernan (b.1948) who sought private donations to bring the house back to its original splendor. The interior was given a complete facelift and furniture from the Blaine period was added. Today, it has been the home since 2019 to the family of Janet Mills, 75th Governor of Maine.

Moving to Maine: The Essential Guide to Get You There and What You Need to Know to Stay By Victoria Doudera

The Salt House: A Novel By Lisa Duffy

Our Governors' Mansions By Cathy Keating