Built in 1818, for Commodore Stephen Decatur Jr. (1779-1820) and his wife Susan Wheeler (1776-1860). The house is one of the oldest of its kind in the city. Designed by Benjamin Latrobe, it is one of the final few examples of his residential dwellings to survive. Having served as the unofficial residence of the U.S. Secretary of States for a period from 1828, it has been home to a series of charismatic, high-ranking politicians and society hostesses. It enjoys a rich social history and today is a museum and events venue known as the National Center for White House History....
zoom_in 13 images 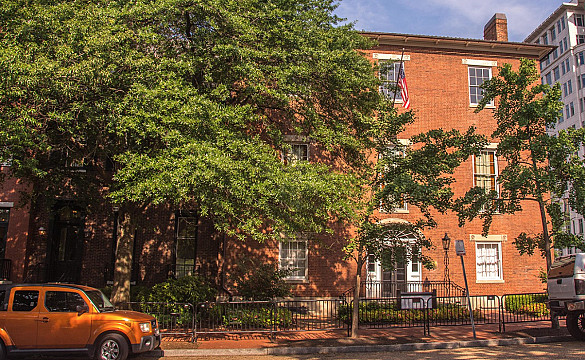 Decatur was the dashing and charismatic naval hero of the Tripolitan War (1801-1805). After the War of 1812, with typical characteristic flair, he laid the flag of the captured British warship HMS Macedonian at the feet of First Lady Dolley Madison. His wife, Susan, was known for her elegance, charm and conversational prowess; and, she had previously spurned offers of marriage from both the former King Jérôme-Napoléon Bonaparte and Aaron Burr Jr. (1756-1836), 3rd Vice President of the United States.

In 1816, the Decaturs came to Washington D.C. as society's new golden couple and it was rumored that the Commodore had his eye on the Presidency. As a fitting base, he purchased a plot of land on Lafayette Square across from the White House. Their new home - the first private residence built on President's Park - was designed by the architect, Benjamin Latrobe (1764-1820), known for his work on the United States Capitol.

The Decaturs moved into their new home in 1819, but their reign was not destined to last: a long-standing resentment between the Commodore and his one-time friend James Barron (1768-1851) culminated in a duel the following year, and Commodore Decatur was killed. Devastated by her husband's death, Susan moved to Georgia. Over the years, many people have since claimed to have seen the ghost of Stephen Decatur while others have heard mournful weeping, alleged to emanate from the heartbroken soul of his widow.

Unofficial Residence of the U.S. Secretaries of State

From Georgia, Mrs Decatur leased the house out to visiting ambassadors from Britain, France and Russia. It then became the unofficial residence of the U.S. Secretary of States: In 1828, Henry Clay Sr. (1777-1852) and his wife Lucretia Hart (1781-1864) moved in. The following year Clay was succeeded as Secretary of State by the widowed Martin Van Buren (1782-1862), afterwards 8th U.S. President, who replaced the Clays at the Decatur House. In 1831, he was displaced by Edward Livingston (1764-1836), of Montgomery Place, who lived here for two years with his second wife Louise d'Avezac de Castera (1785-1860).

Home to Gadsby, the "Old Wretch who Made a Fortune in the Slave Trade"...

In 1838, Mrs Decatur sold the house for $12,000 to the hotelier and slave trader, John Gadsby (1766-1844), who moved in with his second wife Providence Norris (1786-1858). Though somewhat lacking in the taste held by the previous tenants, the Gadsbys gained a reputation for throwing the most lavish parties in the city. Today, they are remembered for building an extension at the rear of the house in which they kept and traded slaves under bondage - long after the slave trade had been banned in America. The French ambassador at that time described an evening spent at Decatur with the Gadsbys:

Some days ago I went to an evening party at Mr. Gadsby's, proprietor of the hotel where I stayed on my arrival here. He is an old wretch who has made a fortune in the slave trade, which does not prevent Washington society from rushing to his house, and I should make my government very unpopular if I refused to associate with his kind of people. This gentleman's house is the most beautiful in the city, very well furnished, and perfect in the distribution of the rooms, but the society, my God!
Back to Politics

During the Civil War, the house - and many like it around Lafayette Square - was requisitioned by the government and used by the Union Army. In 1872, it was purchased for $60,000 by General Edward Fitzgerald Beale whose career had seen him be a war hero, explorer, entrepreneur and the U.S. Ambassador to Austria-Hungary.

When Beale and his wife, Mary Engle Edwards, started to carry out extensive renovations to the old house, in 1873 the Washington Post reported that, "the old Decatur mansion will again rank first among the fashionable residences of our city;" and indeed it did, becoming a center point for Washington's high society and the unofficial meeting place for Republican stalwarts such as President Ulysses S. Grant (1822-1885) who was a frequent guest. The Beales divided their time between their townhouse and their country estate in Maryland, Ash Hill, until he died at Decatur in 1893.

Upon the death of Beale's mother, the house passed in 1903 to the distinguished diplomat Truxtun Beale (1856-1936), U.S. Minister to Persia, Greece, Serbia and Romania. Known for his quick temper, Beale's marriage to his first wife, Harriet Blaine (1871-1958), ended in divorce in 1896. She was co-heiress to Blaine House that he later bought for their son.

Murder for Reporting "An Unconventional Costume"

In 1903, Truxton Beale remarried another beautiful heiress, Marie Oge (1880-1956), for whom he and his friend, Thomas Hansford Williams Jr. (1859-1916), shot the Californian newspaper owner Frederick Marriott Jr. (1851-1925) three times, having suggested in his editorial that Marie was, "playing tag in a rather unconventional costume at Mount Tamalpais". Beale and Williams were acquitted of murder as Marriott survived the attack.

Mrs Marie Beale, the longest private resident at Decatur House, was a society hostess who delighted in holding magnificent parties and even when Prohibition hit America, champagne still flowed at Decatur. Mrs Beale was one of the three "Mrs B's" famous in their time for entertaining Washington's elite in great style at their historic homes, the other two being: Mildred Barnes (1879-1969), the wife of Robert Woods Bliss (1875-1962) of Dumbarton Oaks; and Virginia Murray (1890-1980), wife of Robert Low Bacon (1884-1938) of the Ringgold House. In 1952, a young Congressman from Massachusetts arrived at one of Mrs Beale's black tie dinners wearing a brown suit and red tie - John F. Kennedy (1917-1963) never forgot the good-natured scolding!

In 1944, Mrs Beale restored the exterior of the house to Latrobe's original design. On her death in 1956, she left the house to the National Trust for Historic Preservation who opened it as a museum known today as the "National Center for White House History," part of the White House Historical Association. In keeping with its tradition as a center of society, since 1999 the Washingtonian Magazine has recognized Decatur House - with its courtyard, lush gardens and carriage house - to be one of the top event and wedding venues in the capital. During the summer, jazz is played in the courtyard that is opened to the public. In 2010, the Huffington Post announced that,
The new history center at Decatur House will support research related to White House history, store historical documents, offer expanded educational programs for children, and host lectures and other programs that explore the history of the White House and the surrounding area.

Classical Architecture and Monuments of Washington, D.C.: A History & Guide By Michael Curtis