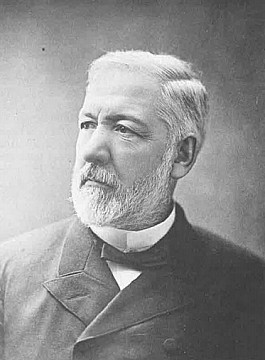 He was born at West Brownsville, Pennsylvania, and was educated at Washington College. He started his career as a teacher in Kentucky where he met his wife, Harriet Stanwood, of Augusta, Maine. They were secretly married in 1850 and officially married in 1851. They then moved to Philadelphia so he could study law before his wife's family bought him a controlling share in the Kennebec Journal and they returned to Augusta in 1853. He quickly became interested in politics and in opposition to the Kansas-Nebraska bill persuaded his followers to call themselves "Republicans".

He was a delegate to the first national Republican convention in 1856, standing for the traditional Whig philosophy but in opposition to slavery. From 1856, he served three terms in the State Legislature and was elected to Congress in 1863, becoming Speaker in 1869. In 1876, he moved from the House to the Senate and served until 1881. He was a great orator and led the group - referred to as "half-breeds" - who opposed Ulysses Grant. Despite his successes, his name was often linked to corruption and bribery, notably in connection with the Little Rock & Fort Smith Railroad, and the Mulligan Letters. Although nominated as a Presidential candidate in 1876 and again in 1880, he failed to advance in either election as the old allegations of corruption continued to follow him. Robert Ingersoll famously referred to him in 1876 as "a Plumed Knight," but others called him "Slippery Jim".

In 1880, he accepted the position of U.S. Secretary of State under his friend, James Garfield, but resigned soon after Garfield was assassinated. In 1884, the Republicans finally nominated Blaine to run for the Presidency, but he lost out by a whisker (just 60,000 votes) to Grover Cleveland. Aside from the old allegations of corruption that continued to plague him, he was accused of fathering a child before he was married and his denunciation of the Democrats as the party of, "rum, Romanism, and rebellion" all added up to his undoing. Avoiding the next convention in 1888, he took a long trip to Europe and spent much of his time at Skibo Castle with his old friend, Carnegie. On his return he threw his weight behind Benjamin Harrison who appointed him Secretary of State.

Ill-health worsened by the effect of losing two of his adult children in quick succession led him to early retirement in 1892, and he died the following year. One of his biggest successes was presiding over the first Pan-American Congress which strengthened the ties of both Americas. From 1862, his principal residence was the Blaine House in Augusta which is today the official residence of the Governors of Maine. He built the Blaine Mansion in Washington D.C., which also still stands, but his summer home at Bar Harbor, Stanwood, was lost to fire in 1947. He and his wife had seven-children including three daughters: Mrs Alice Coppinger; Mrs Margaret Damrosch; and, Mrs Harriet Beale.

Continental Liar from the State of Maine: James G. Blaine By Neil Rolde