Built circa 1865, the central portion of the house started life as stopping place/watering hole for travellers aboard the public carriages on their way back and forth across Long Island. By 1884, August Belmont Sr. had bought up several thousands of acres between Babylon and Hempstead that only a few years before had been dismissed as "barren" lands. Here, he kept a stock farm and in about 1888 his son, August Jr., remodelled this house which included adding the two wings either side. He named his new country estate "Blemton Manor" which was a playful misspelling of their surname....
zoom_in 1 images 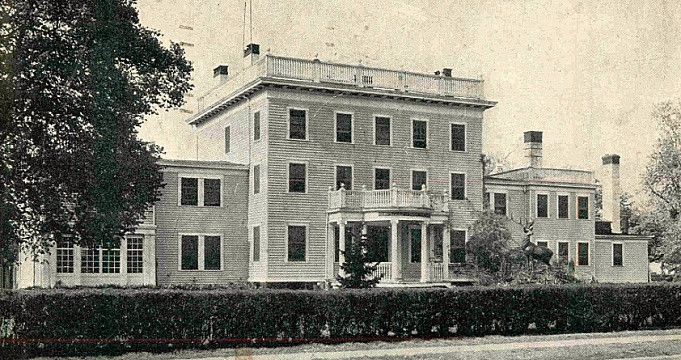 August Belmont Jr. was a well-known financier remembered for financing the first line of what is now the New York City Subway. He quickly established himself here as one the principal country gentlemen. Blemton Manor sat on an estate of 1,100-acres on which he kept a well-known stables stocked with thoroughbreds and polo ponies. He was a prominent member of the Meadow Brook Hunt and the Blemton Kennels bred what were acknowledged to be the finest Fox Terriers in the country. After his brother, Oliver, married Alva Vanderbilt they built Brookholt slightly closer to Hempstead.

Sometime after narrowly escaping being burned down in 1908, the house became home to Elks Lodge, a fraternal order founded, "to promote and practice the four cardinal virtues of Charity, Justice, Brotherly Love and Fidelity; to promote the welfare and enhance the happiness of its members; to quicken the spirit of American Patriotism and cultivate good fellowship". The house was demolished in favor of the Country Estates Apartments. It is not to be confused with his father's home at Babylon that from 1926 until 1935 was the headquarters for the Long Island State Park Commission at Belmont Lake State Park.

Long Island: Our Story By Newsday