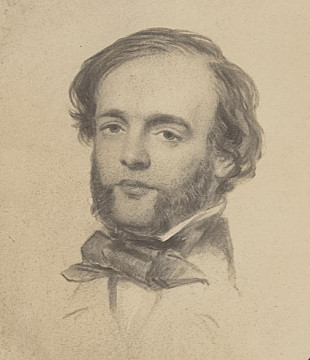 He was born into a Jewish family at Alzey in Rhenish Hesse, Germany, where his father was secretary of the Synagogue. Hesse was occupied by France in 1792 and in 1808 Napoleon decreed that all Jews who did not have surnames should adopt one. His family were already using the surname "Schönberg" and they didn't need to 'Frenchify' it to "Belmont" (which still meant "beautiful mountain" but in French) but perhaps they did so to keep political favor. From that time on they became the Belmonts.

After his mother died in 1821 he went to live with his twice widowed grandmother in Frankfurt. By 1825, his father had run into financial hardship and was no longer able to pay for his schooling. As a result, his grandmother used her late second husband's (Hayum Hanau's) connections to secure him an apprenticeship with the Rothschild Bank. Hanau's half-sister, Eva, was the wife of Amschel Mayer Rothschild, eldest son of the founder of the Rothschild Bank. August began his career sweeping the bank's floors and polishing the furniture while being tutored in English, French and accounting. In 1832, he became a confidential clerk and then secretary to the partners who took him with them as they went to Naples, Paris, and Rome opening up new branches of the bank.

In 1837, Rothschild sent him to represent their interests in Cuba but when the ship reached New York before its second leg to Havana he learned that the financial markets in Europe and the United States were in a state of panic and that the agency representing the Rothschild interests in the U.S. had gone bankrupt. Not having time to await instructions, he rented a small office at 78 Wall Street and opened August Belmont & Co. to salvage the Rothschild's interests. Taking advantage of the panic, he bought up securities on the cheap and as a result both he and the Rothschilds came out of the Depression better off than they went into it. Naming him their new American agent, the Rothschilds gave him an annual salary of $100,000. Investing principally in tobacco and cotton he also handled foreign-exchange currency transactions. By the time of the Mexican-American War (1846), he was the principal underwriter of most of the loans taken out by the U.S. Treasury.

In 1841, he fought a duel with Edward Laight Heyward who was jealous of the attentions being shown to him by a lady - not his future wife as is popularly told, she was then 12 - at William Niblo's Saloon on Broadway, "then the resort of the fashionable fast set". Heyward publicly insulted the lady and when Belmont remonstrated with him, he struck Belmont who then promptly demanded satisfaction. In the ensuing duel, Belmont took a nasty shot in the thigh and for the rest of his life he was unable to walk without a cane.

From 1853 to 1857, he was the U.S. Minister to The Hague in Holland during which time he unsuccessfully attempted to persuade the U.S. to buy Cuba from Spain and join it to the Union as a slave state. Financially, he relied on the Union staying together and he dissuaded the Rothschilds and other Europeans bankers from lending money to the Confederacy during the Civil War. Having become involved in politics, he was Chairman of the National Democratic Party (1860-1872) and after the war - often with  J.P. Morgan - he advanced bond issues for railroads and industry. He died with a $10 million fortune.

He lived between 109 Fifth Avenue in New York and By-the-Sea, his summer home at Newport. He bought an extensive farm on long Island for raising thoroughbred horses and became Chairman of The Jockey Club. He financed the construction of the Bronx racetrack that was the first home of what became the Belmont Stakes, the annual race that together with the Kentucky Derby and the Preakness makes up racing’s Triple Crown. Belmont Park is also named for him. In Edith Wharton's The Age of Innocence she is reputed to have modelled the character of Julius Beaufort on Belmont. In 1849, August Belmont married Caroline Slidell Perry, a scion of one of Rhode Island's oldest families, and they were the parents of six children, notably among them: U.S. Congressman Perry Belmont; Financier August Belmont Jr.; and, Playboy O.H.P. Belmont who married Alva Vanderbilt.

The King of Fifth Avenue: The Fortunes of August Belmont By David Black

The House of Rothschild By Niall Ferguson