Built in 1861, for William Bowers Bourn (1813-1874) and his wife Sarah Esther Chase (1829-1919). This house on Nob Hill - on Taylor Street at the corner of Sacramento - was among the earliest and most classical of San Francisco's mansions and yet its architect is unknown and very little of its history survives. W.B. Bourn came south from New York with the Gold Rush as a supplier and an investor rather than a miner, and his Midas touch quickly became known as "Bourn's Luck". After his death here in 1874 - which some attributed to suicide and others felt was a horrible accident - his family sold up to another man with a sixth sense for a good mine: George Hearst, the father of America's first media mogul who spent his teenage years here....
zoom_in 1 images 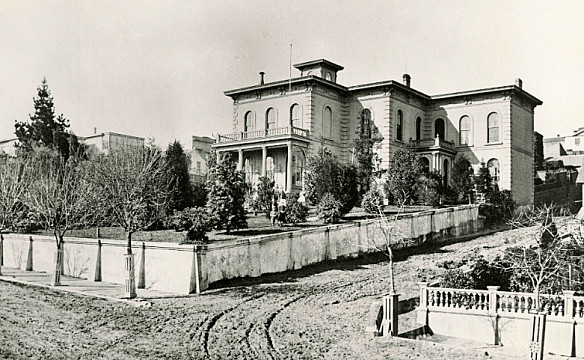 In the same year as building his townhouse, Bourn gained a controlling interest in the Empire Mine which in just that year alone yielded $123,000 in gold. But, when his youngest son was killed in 1872 after accidentally falling off the wall here at their home on Taylor Street, Mrs Bourn began to spend increasingly more time at their country home in the Napa Valley. By 1874, Bourn's luck seemed to be spent as the Empire Mine entered its third year of sitting idle and with his finances significantly depleted, he was killed by a self-inflicted pistol shot to the stomach in his bathroom at Taylor Street.

The newspapers reported Bourn's death as suicide but his friends felt it was a horrible accident. He was hardly bankrupt, leaving $303,000 which did not include the value of his property or mines. The Empire Mine was reinvigorated by his son and yielded $201,000 the following year and has since become one of California's most legendary gold mines.

In 1880, George Hearst moved with his family into the Bourn house from Van Ness Avenue where they'd made their home for the previous five years. Having dropped out of his boarding school in New Hampshire, their son, William Randolph Hearst, was prepared here by private tutors before entering Harvard. It was at Harvard that "Willie" met Ernest Thayer who would live here with Mrs Hearst in 1886 while he found his feet as the newly appointed humor columnist for Willie's first newspaper, the San Francisco Examiner.

In 1888, Phoebe Hearst was elected the first President of the Century Club - a literary and educational club devoted to improving "the condition of womankind" - and its first official meeting was held here. George had by then been appointed the U.S. Senator from California and from 1889 the Hearsts divided their time between their home here and their newly revamped mansion in Washington, 1400 New Hampshire Avenue, where George died in 1891. Within the year, preferring life in Washington, Phoebe sold the house.

The new owner from 1892, is not precisely clear but by 1904 the Bourn-Hearst house was the residence of the widowed Mrs Lucy M. Barker. 1105 Taylor Street was almost certainly one of the 25,000 buildings destroyed by the San Francisco Earthquake of 1906.