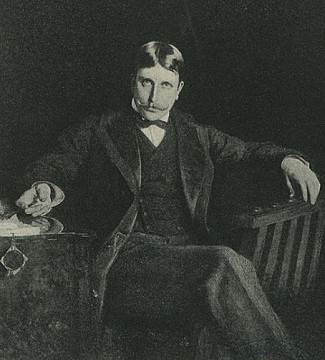 He was born in San Francisco, California; and, was educated at St. Paul's School in Concord, New Hampshire, and at Harvard University before being expelled for sponsoring beer parties and pranking professors. His father put him to work by giving him the management of a local newspaper he'd won in a bet, the San Francisco Examiner, which within just a few years became San Francisco's most popular paper. Hearst hired writers such as Mark Twain and Jack London and then made it his business to expose municipal and corporate corruption - even companies within his own portfolio.

In order to build a national chain of newspapers, Hearst knew he needed to break New York. Funded by his widowed mother, he bought the failing New York Morning Journal and went head-to-head against the market leader, Joseph Pulitzer's New York World. Both papers mastered the use of "Yellow Journalism" (eg., eye-catching headlines, imagery over writing etc.) though Hearst championed Progressive left views and Isolationism. Their bitter rivalry ended with a truce in 1898 after both lost millions of dollars covering the Spanish-American War (1898), a conflict that the Journal influenced directly by fanning the flames of war through provoking populist American outrage against Spain.

By the 1920s, Hearst owned 28-nationwide newspapers in every major American city and enjoyed a daily readership of 20 million. He branched out into publishing; owned two news services plus radio stations and founded the International Film Service. But, despite all this, it is unlikely that any of the newspapers paid their own way and were instead financed by Hearst's more profitable interests in mining, ranching and forestry, inherited from his father. The Great Depression of the 1930s saw his media empire crumble and by 1937 the Hearst Corporation was reorganized by court mandate: the reins were taken from him; newspapers were liquidated; the film company was shut down; and, there was even a well-publicized sale of his art and antiques. The company enjoyed a resurgence during World War II, but its heyday was over. By the time he died in 1951 its assets were down to only a few million but the Hearst Corporation, carried on by his sons, continues today as the largest privately-owned media conglomerate based in New York City.

From 1903, Hearst was twice elected to the U.S. Congress as a Democrat. He was unsuccessful in a run for the U.S. Presidency in 1904; was 3-times narrowly defeated running for Mayor of New York (1905 and 1909); and, was also defeated running for  Governor of New York (1906). He supported the left and claimed to be behind the working class, but after WW1 his views became more conservative. He initially supported President Franklin D. Roosevelt but after 1935 became one of his most outspoken critics. In return, Roosevelt implemented a tax program that hit him directly, declaring: "That's for Hearst".

He incurred his mother's wrath when he commissioned the Hacienda del Pozo de Verona behind her back, and from 1908 lived at Hearst's Clarendon, the largest apartment in the history of Manhattan. After his mother died in 1919, he started work on Hearst Castle before acquiring a real castle in the United Kingdom, St. Donat's Castle. In 1926, he remodelled the 110-room Ocean House at Santa Monica for his mistress and to keep his wife happy bought her Beacon Towers on Long Island, as a "between-seasons" the following year. He had to scrap his grand plans to rebuild his mother's fairytale castle at Wyntoon and settled for creating a magical Bavarian Village in its place that continues to remain in the Hearst family today. His wife remained in Manhattan at 91 Central Park West and he lived out his final days at his mistress' house in Beverly Hills.

As a collector of art and antiques, in 1935 Fortune Magazine called him, “quantitatively the world’s Number One collector of objects d’art,” and his obituary in The New York Times claimed that he had accounted for 25% of the world’s art market activity during the 1920s and 1930s. His life story inspired the creation of Charles Foster Kane, the lead character in Orson Welles's classic film, Citizen Kane (1941). He was married in 1903 to Millicent Willson and they had five sons. He also quite openly kept a mistress, Marion, an actress 34-years his junior, and by her he is allegedly the father of Patricia Lake.

Theodore Roosevelt called Hearst, "an unspeakable blackguard (with) all the worst faults of the corrupt and dissolute monied man". Sir Winston Churchill described him as, "a grave simple child - with no doubt a nasty temper - playing with the most costly toys... two magnificent establishments, two charming wives, complete indifference to public opinion (and) oriental hospitalities". Publicly, his support of Nazi Germany in the early 1930s and his depiction in Citizen Kane tarred his image irreparably. Time magazine asked: "How had a man who built the greatest publicity machine in history not only gone bankrupt but become so hated in his country that Hearst Pathé News had to eliminate 'Hearst' from its logo because people hissed when his name came on the screen?"

The Times We Had: Life with William Randolph Hearst By Marion Davies