Completed in 1903, for Anson Phelps Stokes (1838-1913) and his wife Helen Louisa Phelps (1846-1930). Situated on 10-acres lanscaped by Daniel W. Langdon at the end of Long Neck Point overlooking Long Island Sound, it was designed by the Stokes' son, Newton, of the firm Howells & Stokes. Although the country home of one of Mrs Astor's hallowed "400" - and for one season to Andrew Carnegie - it became better associated with hosting socialist meetings organized by various of the Stokes' public-minded children. From 1924, it became an exclusive girl's private school run by the Convent of the Sacred Heart but after that closed in 1966 the central portion of the house was demolished and the two remaining wings were converted into single residences....
zoom_in 10 images 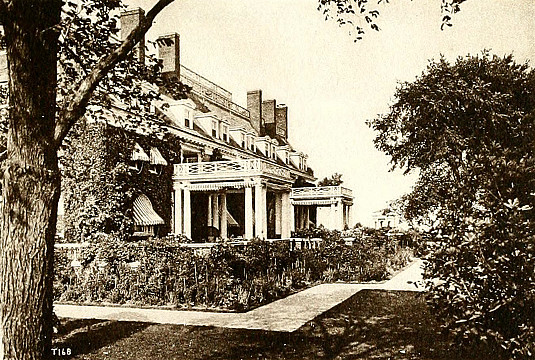 After Anson Phelps Stokes lost his leg in a riding accident at Shadow Brook in Lenox, Massachusetts, he decided to sell up and employed his son to build this house in the ancestral homeland of the Phelps family, Connecticut. He write that his wife, "found a charming location at Noroton Point, about a mile west of the Hoyt place (four miles by land)". They bought the 10-acres estate on November 8th, 1901, and first moved in at the end of 1903. They first called it "The Point" before changing it to, "Brick House".

A Bastion of Socialism

The children of the Phelps Stokes family were among the most public-spirited perhaps of any of New York's Gilded Age elite and from this grand setting just outside the town of Darien they hosted numerous and diverse socialist meetings. But even their leftist leanings were challenged when their brother, Graham Phelps Stokes, was married here in 1905 to the Russian-born Jewish radical union organizer and activist in the Communist Party of America, Rose Pastor Stokes. Despite raised eyebrows within the family, publicly they closed ranks and Graham's brother, the Rev. Anson Phelps Stokes, gave a statement to the press: "Rose Pastor is a noble woman and has done noble work. The family is very much pleased with the match. It is an ideal one in all respects."

If the union of Graham and Rose had raised eyebrows within the Phelps Stokes family, their honeymoon may well have raised eyebrows within communist circles as the champions of the left took off to Europe, meandering their way across the continent in a Packard touring car complete with their own chauffeur - a small gift from Mrs Stokes.

A Bastion of the Elite

In the summer of 1916, Mrs Stokes leased the Brick House to America's most celebrated industrialist and philanthropist, Andrew Carnegie, who shared many of the family's socialist feelings. But the few months he spent here were hot and humid and only made him miss the cool climate he had enjoyed for so many years at his beloved Skibo Castle. Though war and ill health put an end to any hope he had of returning to Scotland, it was Mrs Stokes who suggested to Mrs Carnegie that her husband may perhaps be more comfortable with the cool, clean air of the Berkshires and that October Carnegie purchased Shadow Brook, the sprawling mansion built by the Stokes in 1893.

A Bastion of a Bygone Era

In 1924, the Phelps Stokes family either sold or gifted their country home in Connecticut to the Convent of the Sacred Heart who ran it as an exclusive girl's private school. Two of JFK's sisters - Eunice and Kathleen - were both educated here. When it closed its doors in 1966, the central portion of house was demolished and the two remaining wings were converted into single residences and still stand today.

Rebel Cinderella: From Rags to Riches to Radical, the Epic Journey of Rose Pastor Stokes By Adam Hochschild