Rebuilt from 1898 by the notoriously philanthropic industrialist, Andrew Carnegie (1835-1919) and his wife, Louise Whitfield (1857-1946). The Carnegies more than tripled the size of the existing castle to a colossal 60,000 square feet, though this was only fractionally larger than their New York townhouse, the Andrew Carnegie Mansion, built in the same period. Skibo remained in the Carnegie family until 1982 and has since been home to The Carnegie Club, which is limited to 400 private members. In 2000, Skibo made headlines again when it hosted Madonna's wedding to Guy Ritchie....
zoom_in 12 images 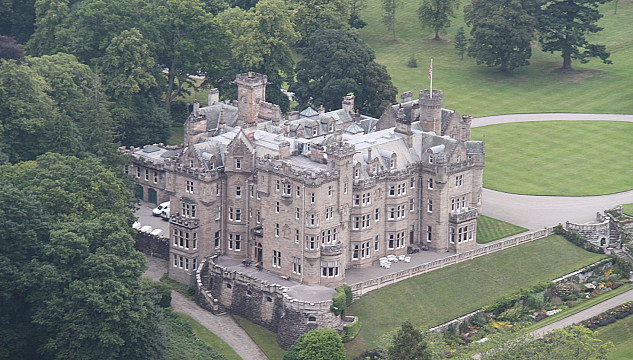 There has been a castle at Skibo since 1211, when it was the seat of the Bishops of Caithness. It was gifted by the church to the Gray family in 1545 and remained in their family until it was surrendered by Robert Gray after the Battle of Culloden in 1746. One of his relatives acquired the estate and built a modest turreted castle here in about 1760. Over the next 100 years, it passed through several hands until 1872 when it became the property of Evan Charles Sutherland-Walker (1835-1914) who increased the castle to 16,000 square feet. However, by 1890 it was falling into disrepair and he put it up for sale:

It may be doubted whether any estate in the Highlands can rival Skibo in extent and variety of attractions. The beauty of its situation - the salubrity of its climate - with the magnificent modern residence on the site of the ancient seat of the Bishop of Ross - all contribute to the residential value and interest of an estate with nearly 20,000 acres and over 200 tenants.

Back in 1886, Andrew Carnegie had his heart set on building a castle at Cresson in Pennsylvania where he kept Braemar Cottage, the humble home where he and his mother had summered for the previous decade. He bought up 500-acres and contracted the great American designer Frederick Law Olmsted to draw up plans for the castle and its estate. But, when his mother, Peggy, died at their cottage that same year, he never stepped foot in Cresson again, disposing of all his property there and any plans he had for a castle.

"Heaven itself is not so Beautiful as Skibo"

By the 1890s, Carnegie and his wife, Louise, had taken to hiring houses in Britain for the summers, such as Buckhurst Park in Sussex which was a particular favorite. In 1897, they took a one-year lease with an option to buy at Skibo in Carnegie's native Scotland. It was love at first sight and Carnegie purchased the castle and its 28,000-acres the following year for £85,000. He was later heard to say, "Heaven itself is not so beautiful as Skibo".

The Carnegies proceeded to spend a further £2 million, more than tripling the size of the castle to 60,000 square feet while adding an indoor swimming pool, a 9-hole golf course and creating an ornamental loch, Loch Ospisdale. To the amazement of many, there was electric lighting throughout, an internal lift and a plentiful supply of hot and cold running water to each of the castle's 20 guest suites.

In 1902, King Edward VII turned up quite unannounced one morning to inspect Skibo, which was then seen to be at the cutting-edge of luxury living, so that he might take home some ideas on how to improve Buckingham Palace. The organ player who had been taking an early morning dip in the pool had to race out in order to pipe up "God Save the King"! Other curious guests (with prior invitations!) included Woodrow Wilson, Herbert Asquith and Helen Keller, as well as his old friend from Batemans in Sussex, Rudyard Kipling.

When World War I broke out in 1914, civilian travel between Europe and the States became unsafe and whereas the Carnegies had usually delighted in passing their summers in Scotland, it now became impossible. They stayed with various friends until purchasing Shadow Brook in Lenox, Massachusetts, where Carnegie died in 1919.

Some of the traditions that Carnegie started at Skibo are continued today: A Union Jack flies at one end of the castle while the Stars and Stripes flies at the other; and, at 8am a piper makes his way round the castle to call the guests to breakfast. From 9am to 10am, the organist plays a mix of bracing and uplifting tunes. Above the bookcases in the library is inscribed one of Carnegie's favorite sayings: "He that cannot reason is a fool. He that will not is a bigot. He that dare not is a slave."

After Skibo was sold by Carnegie's descendants in 1982, the castle was acquired by businessman Peter de Savary who created The Carnegie Club. It was sold on again in 2003 to American Ellis Short who carried out a £23 million restoration of the property and continues to run it as the exclusive Carnegie Club.

A Season in Dornoch: Golf and Life in the Scottish Highlands By Lorne Rubenstein. Foreword by Sean Connery

How The Scots Invented the Modern World By Arthur Herman

Highlanders: A History of the Scottish Clans By Fitzroy MacLean

Skibo: The story of the Scottish estate of Andrew Carnegie, from its Celtic origins to the present day By Joseph Frazier Wall