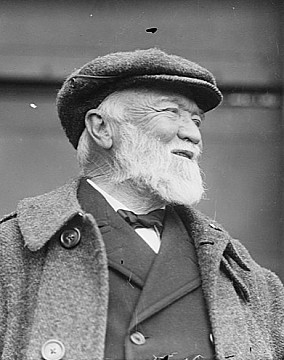 He was born in a one-room cottage shared by two families in Dunfermline, Scotland, and was educated at the Free School until he was 12 in 1848. That year, facing starvation, his family emigrated to Allegheny City, Pennsylvania, where he started work in a cotton factory before taking the advice of an uncle and entering the telegraph industry as a messenger boy. Becoming an operator in 1853, he was hired as secretary to Thomas A. Scott, President of the Pennsylvania Railroad, who was the catalyst to his career and helped him invest his money in several growing businesses. Using their relationship and his savings by the late 1850s Carnegie had established his first business supplying rails and bridges to the Railroad as well as arranging an industry-changing merger between George Pullman and a company in which he'd invested.

During the Civil War, Scott (by then appointed Assistant Secretary of War) placed him in charge of military transportation and Union telegraph lines. After the war, Carnegie quit the railroad industry to focus on iron production while still heavily reliant on his relatonship with Scott and J. Edgar Thomson. He secured his fortune by improving on a process to mass produce steel cheaply and by the 1880s Carnegie Steel was the largest manufacturer of pig iron, steel rails, and coke in the world. In 1892, he combined all his assets and partnering with the likes of Henry Clay Frick, Henry Phipps etc. formed the Carnegie Steel Company. In 1901, it became the first corporation in the world with a market capitalization over $1 billion when it was bought out by J.P. Morgan (creating the U.S. Steel Corporation) in what remains the largest industrial takeover in U.S. history.

Carnegie's share of the profits was $226 million and from 1902 he retired to focus all his energies on philanthropy. Having already written "The Gospel of Wealth" his belief was that the rich should use their wealth to enrich society and he supported both progressive taxation and estate tax. He concentrated his philanthropy on social and educational advancement. He funded the construction of 7,000 church organs and 3,000 libraries across 47-states as well as in Canada, Britain, Ireland, Australia, New Zealand, South Africa, the West Indies, and Fiji. He was a generous benefactor of the Tuskegee Institute for African-American education and co-created the National Negro Business League.

His first real home in the States from 1875 was Braemar Cottage. After his mother died, he scrapped his plans to build a castle in Pennsylvania and in 1897 bought and rebuilt his beloved Skibo Castle in Scotland, dividing his time principally between there and the mansion he built in New York City at 2 East 91st Street, now home to the Cooper-Hewitt Museum. He died at Shadow Brook in Lenox survived by his widow and daughter.

Greed in the Gilded Age: The Brilliant Con of Cassie Chadwick By William Elliott Hazelgrove

The Gospel of Wealth Essays and Other Writings By Andrew Carnegie. Foreword by David Nasaw