Completed in 1892, for The Hon. James Dunsmuir (1851-1920) and his American wife Laura Miller Surles (1858-1937) whose maternal ancestors (the Byrds) built the Westover Plantation in Virginia. Burleith was principally a Queen Anne-style mansion on an estate of 20 acres between what is now Burleith Crescent and Sunnyside Avenue; and, it was home to the Dunsmuirs for the best part of two decades before they moved into Hatley Castle. Destroyed by a fire in 1931, today all that survives is the gate lodge and parts of the stone wall on the north side of Craigflower Road....
zoom_in 1 images 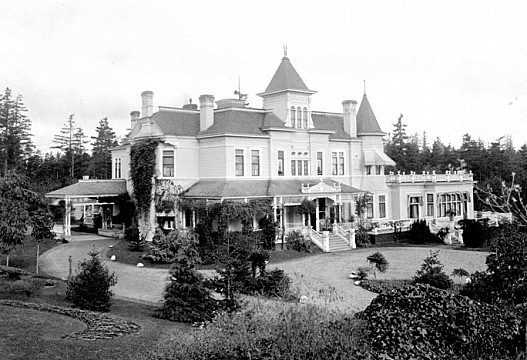 In 1890, James Dunsmuir's newly widowed mother, Joan Olive White (1827-1908), had completed Craigdarroch Castle and summoned him and his wife from Nanaimo to Victoria to better oversee the family's coal mining interests. The following year, James and Laura purchased a 20-acre plot overlooking the Gorge Waterway, spending a further $50,000 on the mansion itself to the design of local architect John Teague (1833-1902).

Though principally a Queen Anne-style mansion, the house in fact incorporated several different architectural styles. In today's terms, it stood roughly at the end of Coventry on the bend where Selkirk Avenue curves to the left. They named the house "Burleith" for the village in Scotland where James' recently deceased father, The Hon. Robert Dunsmuir (1825-1889) - the founder of the family's fortunes in Canada - was born.

Burleith's interior was finished in antique oak and Californian sequoia, boasting every modern convenience which included electric lighting, electric bells and even speaking tubes. The principal reception rooms on the ground floor were the oak-panelled hall, morning room, drawing room, dining room, smoking room and billiards room. The second floor was accessed by the wide staircase at the foot of the hall leading to the bedrooms, nurseries and another set of stairs that led up to the observation tower (with its view across the Gorge) and servants rooms.

Approached by a winding carriage-drive, the show-piece mansion with its long veranda that swept around the outside was made almost entirely of wood with a white clapboard and shingle exterior - even though Teague had recommended it be built of stone. Landscape architect John Blair (1820-1906), who had recently completed Beacon Hill Park, designed its rambling gardens with views over the Gorge where Dunsmuir kept his private yacht. The grounds included terraces, croquet lawns, tennis courts, a playhouse for the children and a series of bridle paths.

In the summer of 1892, to celebrate the completion of their new house British Columbia's wealthiest family held a suitably lavish ball at Burleith for the crème de la crème of society. Three hundred guests saw the night out dancing to an orchestra amidst palms and potted plants laid out in the ballroom and over the garden's terraces. Another special event occurred in 1901 when the future King George V (1865-1936) was touring Canada with his wife, Queen Mary of Teck (1867-1953), as the Duke and Duchess of York:

The Duchess of York, the future Queen Mary… slipped away with several members of her party to sail up the quiet waters of the Gorge for a visit to Burleith… The Duchess, Laura discovered, was intensely interested in how other people lived. As Laura's daughter Bessie recalled, "the Duchess looked over the whole house, from top to toe, and much embarrassed my mother when she insisted on going upstairs. Mother was so worried it wouldn't be all tidy, because everybody had been so busy all morning tidying up the downstairs.

In 1906, Dunsmuir was appointed Lieutenant-Governor of British Columbia which meant taking up at the official residence, Cary Castle. It was also at this time that Dunsmuir abandoned the idea of spending $60,000 to enlarge Burleith and instead purchased the land on which he would build Hatley Castle. While the family were happily ensconced at Cary Castle and plans were being drawn up for Hatley Castle, Burleith became superfluous and was sold.

The property was subdivided and sold off in lots. It was at this time that many of the Edwardian residences seen along Northcott and Arm Streets were put up. As for Burleith itself, it remained empty and gradually fell into disrepair until it was completely destroyed by a fire on Halloween, 1931; the accidental result of children playing with firecrackers in the deserted house.

Today, all that remains of Burleith are parts of the old stone wall along Craigflower Road that weren't used in the construction of new houses in the area; and, the old blue wood-frame house at 701 Craigflower by Coventry, which was the original gatehouse at the foot of the drive. 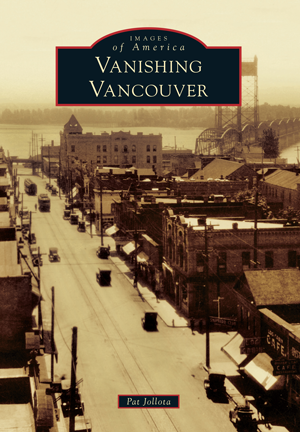