Rebuilt and remodelled by John Adam between 1753 and 1756 for Sir Ludovick Grant around a 16th-century L-plan tower house that was originally called Castle Freuchie. In addition to building the castle, he also laid out the town of Grantown-on-Spey, previously known as Castletoun of Freuchie. Sir Lewis Alexander Grant remodelled some of the interiors in 1836 before it passed to his cousin John Charles Ogilvy-Grant (1815-1881), 7th Earl of Seafield, who in 1860 hosted Queen Victoria and Prince Albert. The Queen described the estate as a, "fine (not Highland-looking) park, with a very plain-looking house, like a factory". By the 1880s, it had its own private railway station and encompassed 160,000-acres, but by then the 8th Earl had moved the family's principal residence to nearby Cullen House. They leased the estate to wealthy sportsmen including George J. Gould, a colorful multi-millionaire from New York....
zoom_in 6 images 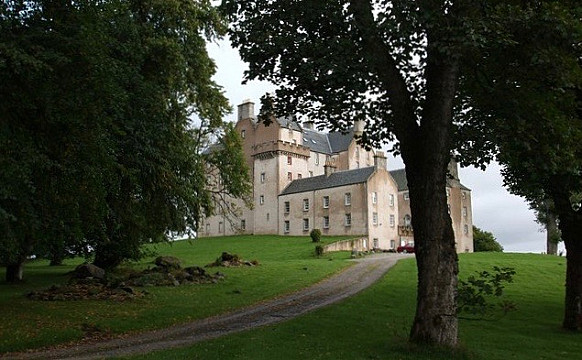 George J. Gould briefly lived here with his new wife to enjoy the sport, but also to escape the backlash from marrying his mistress, Guinevere, a former chorus girl 20-years his junior just six months after his own wife had dropped dead on their golf course at Georgian Court. From the 1930s, Castle Grant was abandoned and left derelict until is restoration in the 1990s. In 2006, it was purchased for £750,000 - with a 110% mortgage - by former Rangers owner Craig Whyte, but it was repossessed by the Bank of Scotland after he was cleared by the High Court for having acquired the football club by fraud.

Its next owner was no more salubrious: In 2014, the Russian Sergey Fedotov bought the castle for a reported £1 million. Just two years later, he was arrested in Moscow before being convicted of embezzling £4 million from the Russian Author's Society - which it was suggested included the £1 million that was used to acquire Castle Grant. After having served 18-months in jail, Fedotov placed the castle on the market in 2018 for £850,000.