Built from 1896, for George Jay Gould (1864-1923) and his first wife, Edith Kingdon (1864-1921). There are some styles of house that simply can't be described as anything else other than "American": Georgian Court is one. It was designed by Bruce Price, then better known for the Chateauesque style who when asked about Georgian Court explained, "it was in fact, an attempt to put a French chateau roof on an English Georgian house". The Goulds loved entertaining and it was here in 1904 that George famously hosted a game of 'live chess' using boys, "attired in costumes of the 15th-century". It was where Edith Wharton directed a private performance of one of her plays starring Mrs Gould; and, tragically, it was also here where Mrs Gould dropped down dead in 1921, found to be wearing an excruciating rubber undergarment to make herself appear slimmer and more desirable to her less than faithful husband....
zoom_in 20 images 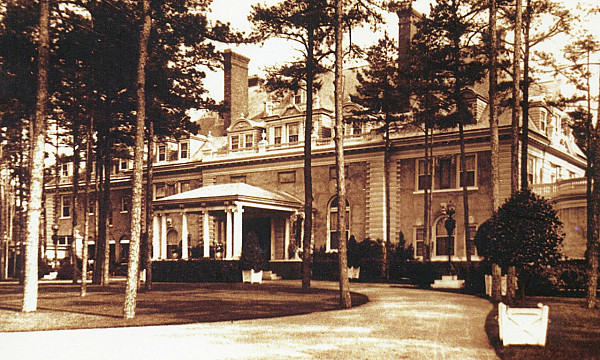 George J. Gould was the eldest son of Jay Gould, one of the most infamous "Robber Barons" of the railroad era who died with a fortune of $84 million - and a reputation as one of the most despised men in America. George shunned college to work directly under him and aside from receiving one-sixth of his fortune, from 1892 he not only took over his father's railroads, but he also became the head of the family's investments. But as the years passed he became more interested in pleasure than business and under his watch the family fortune defied inflation and by the time he died it had shrunk to $50 million.

Facing the Carasaljo Lake some 300-feet distant and surrounded by Lakewood's famous pines, the mansion contains 30-rooms and has a facade of 200-feet with a width of 50-feet. Immediately upon entering one is struck by the scale and opulence of the double-height 50-foot long hall. It's surrounded on three sides by a mural painted by Robert Sewell that is 16-feet high and rolls out across 80-feet depicting scenes from Chaucer's Canterbury Tales. The original chandelier was made of 150 individual prisms of cut glass that radiated over the marble, gold, and crimson velvet decor. The other reception room of particular note is the Music Room that exhibits no less than 30 Rococo panels painted by four artists: Shean, Maynard, Pennington and Wiles. A variety of marbles were used in the mansion's interior, including Green Vermont, Pavanazza, Royal Irish Green, Black Egyptian, and Gray Billear Roman. The woods used were equally diverse: quartered white oak, Zambesi, East Indian mahogany, San Domingo mahogany, white pine, and poplar.

Lakewood's sandy soil is not ideal for growing exotic plants, so to create the gardens Price ordered in 5,000 cartloads of fine loam from Monmouth County. In 1896, he laid out three of the four gardens seen today: the 120-x-60-foot Sunken Garden with marble statuary; the Formal Garden; and, the Italian Garden that features the marble fountain with a 60-foot diameter at the center of which is a sculpture depicting Apollo driving a Nautilus shell (both cast in bronze) pulled by two marble winged-horses with nymphs in their wake. Sculpted in Italy, it was a birthday present from George to Edith in 1900.

Gould already kept Furlough Lodge up in the Catskills as a retreat for fishing and hunting. Georgian Court was built on 200-acres and everything about it was geared towards leisure and entertainment. In 1899, after rain ruined a garden party, Price built him an indoor 275-x-200-foot "Casino" centered around a tanbark hippodrome. It was 400-yards from the house and cost $250,000, containing: tennis, racquet and squash courts; a 25-x-60-foot pool; a gymnasium; three bowling alleys; a billiards room; Turkish Baths; Russian Baths; a Steam Room; and, 20-bedrooms for the in-house polo team. The grounds contained: three polo fields that were later reconfigured to create a 9-hole golf course; a rambling stable complex; fish-stocked ponds; and, woods teeming with game.

A few days before Christmas in 1899, the Goulds celebrated the opening of the Casino with a weekend extravaganza to which many of the most prominent names in New York and Philadelphia were invited. Over the course of the two days were dinners, dancing and a theater was built specially for the occasion over the stables in whch three plays were shown: "a dainty, bijou play-house complete in every detail, furnished in dark red and gold and seating about 125". Here, Mrs Gould made her first return to the stage since her marriage, starring in "The Twilight of the Gods," written and directed by Edith Wharton.

In 1904, Gould hosted a chess game in the Casino between Dr Charles Lindley of Beverly Hills and Professor Francis M. Roser of New York. But, it wasn't just any game. It was played on a life-size board and the pieces were boys dressed in 15th century regalia:

"The pawns were valets, waiters, and pages. The knights were arrayed in beautiful armour, like that worn by the Ordonnance Gendarmerie of Charles the Bold (the Compagnie d'Ordonnance of France's King Charles VII)... the castles were represented by horsemen equipped from head to foot with battlement helmets. The bishops were clad in superb vestments made of precious material. The queens had full robes of heavy brocade. The kings moved about with crowns on their heads, and sceptres in their hands, their costumes being covered with precious stones. The heralds arrayed in dress of the period, announced the commencement of play by a flourish of trumpets, and at the end of the game the figures of the conquered came and knelt before the conqueror, who with a benevolent and lovely gesture, ordered them to arise again. This little folly, of which the dresses alone cost the mere bagatelle of 100,000 francs, proved a successful affair".

Over the years, Edith's once admired buxom figure relaxed with age, and a fondness for candy. As the pounds piled on, she began to spend less time among society at their Manhattan mansion, 857 Fifth Avenue, and more time at Georgian Court. In the meantime, George's eye began to rove and from about 1911 he commenced an affair with a chorus girl 20-years his junior, Guinevere Sinclair. In a bid to win back his attentions, aside from taking up golf and a regimen of steam baths and massages, she took to wearing a prescribed, tight rubber suit under her clothes to constrict the unwanted bulges.

On November 14th, 1921, playing off the 5th tee with George, she dropped dead of a heart attack. The job of the two physicians called to the estate to determine the cause of death was made that much easier when the excruciating undergarment was revealed.

Before George died in 1923, he estimated his personal fortune at $30 million. Once debts, taxes, and legal disputes had been settled, there was only $2.3 million left in the pot. The extravagance that was Georgian Court was sold to the Sisters of Mercy on the condition that they rename the school they intended to move there, "Georgian Court College".

An auction of its furnishings (including those in the servant's quarters and down to the gardener's tools) was held over one week in Spring 1924 and raised a further $91,780. It was reported that Mrs John Ringling (wife of the circus impresario) was the busiest shopper. William F. Curran's purchases were conducted 'secretly' on behalf of two of the Gould's daughters (Edith and Gloria) and P.A. Curran bought on behalf of the College.

The stables have been repurposed for administration and catering. The casino - unsurprisingly - remains a sports center and the mansion itself has been painstakingly restored. Other than the Conservatory that is now the Sister's Chapel, the rest of its opulence is used for entertaining and special events. The 156-acre grounds have been equally well preserved and since 1989 have been known as the Sister Mary Grace Burns Arboretum which exhibit rare and exotic trees from around the world. Today, the estate is on the National Register of Historic Places and a National Historic Landmark.

Under a Gilded Moon: A Novel By Joy Jordan-Lake

The Gilded Years: A Novel By Karin Tanabe

The Immortal Game: A History of Chess By David Shenk

Unmentionable: The Victorian Lady's Guide to Sex, Marriage, and Manners By Therese O'Neill