Completed in 1881, for William Mellis Christie (1829-1900) and his wife, Mary Jane McMullen (1830-1909). Situated on the corner of Queen's Park Crescent and Wellesley Street, if the stories are to be believed the mansion once concealed a dark secret resulting in it being haunted today. Having been a residence for female students at St. Michael's College for close to 80-years, since 2008 the University of Toronto has leased it to Regis College, the theological school affiliated to the university....
zoom_in 6 images 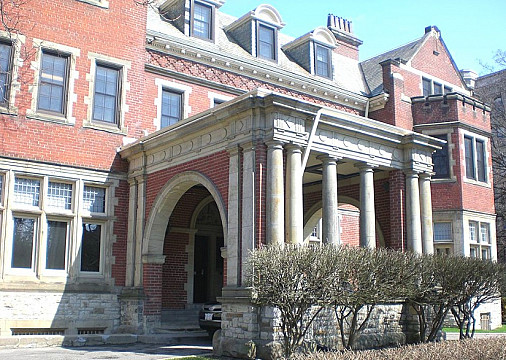 William Christie was a Scots-born baker who rose to become President of Christie, Brown & Co., the largest manufacturers of biscuits in Canada. He purchased the land on which he built this mansion from the University of Toronto and moved into the new Tudor/ Jacobean mansion in 1881. Coincidentally, his eldest son-in-law, John J. Palmer, later took up residence at Lawton Park, renaming it "Huntly Lodge" for William's birthplace.

Christie died here in 1900. He left both his business and his mansion to his only surviving son, Robert Jaffray Christie (1870-1926). Robert lived here - ostensibly - with his wife, Emma Lee, their three children, and the obligatory retinue of servants. But, if the rumours that still circulate about the old house are to be believed, they were joined by one more...

According to an urban legend, Robert was devoted to his wife but nonetheless had a mistress with whom he became so infatuated that he smuggled her into the mansion to enjoy her at his own leisure. She was placed in a room with a bathroom hidden by secret panels to keep her out of sight and sound, yet right under the nose of his family. Food was brought to her by a paid-off servant, but she was unable to leave and to make matters worse Robert eventually began to tire of her. Unvalued, unloved, entirely alone and unable to leave, his mistress apparently hung herself and her ghost is said to remain here today.

Shortly before Robert died in 1926, he sold the house for a reported $125,000 to the Sister's of St. Joseph who ran both the St. Joseph's College School next door and St. Michael's College. After his death, the house was transformed into a female residence for the girls studying at St. Michael's. Although this was of course now rife ground for rumor-mongering, a tale is still told: "They say that if you enter Room 29 all by yourself at night, the door will swing shut behind you. You will find it locked; nothing you can do will open it. And if there’s no one on the other side of the door to hear your screams, you’ll be trapped all night, just like Robert Christie’s mistress all those years ago"....!

One thing is for sure: for whatever reason, Mrs Christie had no desire to remain in the house and in 1927 commissioned commissioned John McIntosh Lyle (1872-1945) to build the Mrs R.J. Christie Mansion where she lived until her death in 1954. In 2008, the University of Toronto bought her husband's old home from the Sisters of St. Joseph and since then they have leased it out to Regis College, the university's theological school.

Tudor Architecture in Ontario in Colour Photos: Saving Our History One Photo at a Time By Barbara Raue

Toronto: Biography of a City By Allan Levine

Toronto Then & Now By Doug Taylor

The Toronto Book of the Dead By Adam Bunch

The Saturday Night Ghost Club: A Novel By Craig Davidson