Completed in 1833 for John G. Coster (1762-1844) and his wife, Catherine Margaret Holsman (1778-1847). This was the home of the man who in 1830 was named as one of New York's five millionaires and in 1832 his wife found herself co-heir to her half-brother's, George Lorillard's, $3 million estate. Fittingly, their house was designed by two of the leading architects of the day, Alexander Jackson Davis and Ithiel Town. The mercantile historian Walter Barrett described it as, "a splendid granite double residence... a palace in its day"; and, Philip Hone remarked that it was, "furnished in the most elegant style". But, by 1848, the Costers were dead and their spendthrift children sold the mansion which then became a music hall, available for "Lectures, Concerts & Balls"....
zoom_in 3 images 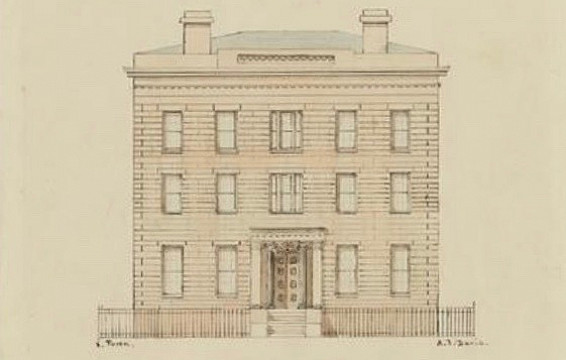 By 1863, the house had become referred to locally as the "Chinese House," owing to a popular exposition held there by a merchant recently returned from Canton who filled it with Chinese artefacts of all shapes and sizes. That same year, the once stately mansion found itself again transformed, this time into "Van Amburgh & Co.'s Menagerie". Where New York's finest had once waltzed and curtsied, now "the wonderful elephant, Tippoo Saib" and other equally exotic animals found themselves parading the same ground!

On July 13, 1865, a fire brought down P.T. Barnum's American Museum and just seven days later he took up the lease for the "Chinese House". He adapted it to become a museum, lecture hall, and circus; and, known as the new "Barnum's American Museum". The stage was 50-feet wide by 45-feet deep and the auditorium was 80-feet deep, designed to hold an audience of 2,500. In the meantime, Barnum's agents scoured Europe to gather, "every article of purchasable curiosity they could find," irrespective of cost. For 3-years, Barnum's was a hit attraction. But, a fire in 1868 brought the house down - literally - and part of the commotion that night saw a tiger burst through a window onto Broadway!

The mansion and its neighbour (537 Broadway) were damaged beyond repair. Within a year the S.A. Beekman & Co. Building was put up, still seen today at 537-541 Broadway.