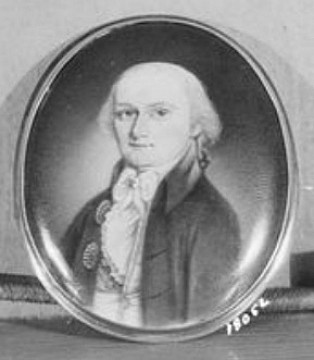 He was born in East Friesland, Holland. His eldest brother, Haro, was "an eminent surgeon" with the British Navy and under his auspices John studied medicine and was for a brief period at Demerara in the West Indies. In 1786, he had a change of heart and arrived in New York City to enter into business with another brother, Henry A. Coster, establishing the firm of Henry A. & John G. Coster. By 1789, their importance was such that John was invited to attend George Washington's Inaugural Ball, wearing a, "lavishly embroidered velvet jacket and knee pants" that have since been displayed at the Museum of the City of New York. By the time Henry died in 1820, their firm was worth a staggering $3 million. John continued their business (described in greater detail in his brother's biography here) and was President of the Manhattan Bank too. In 1830, John was named as one of New York's five millionaires along with John Jacob Astor, Stephen Whitney, Nathaniel Prime, and Robert Lenox. In 1833, he built his mansion at 539 Broadway, then considered "one of the finest residences in New York City".

In 1797, he married Catherine Holsman, half-sister and co-heir of George Lorillard (son of the founder of Lorillard Tobacco) through whom she inherited $500,000. John had enjoyed an untarnished reputation, but his children were spoiled and towards the end of his life his fortune was significantly diminished through losses sustained by his sons and sons-in-law. It was even commented in the press (The Morning Herald, 1840) that, "Mr. C. has been rather too indulgent a parent; but immense wealth in the hands of a parent is apt to make children careless." He had 12-children, 10 survived infancy (listed above). His pallbearers included his sister-in-law's first cousin, Philip Hone; the father-in-law of one of his nieces, Edward Laight; and, "one of his oldest friends," John Jacob Astor.