A. J. Davis, of New York; America's Pre-Eminent Architect of the Picturesque 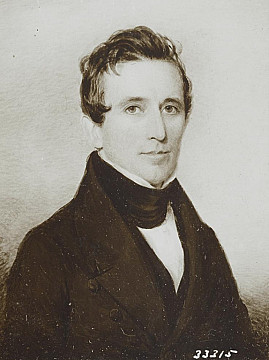 He was born in New York City, but his father who struggled for work moved the family frequently and he grew up predominantly in Newark, Utica and Auburn. Having served an apprenticeship as a printer, he came to New York in 1823 determined to be an artist. He completed courses at the American Academy of the Fine Arts, the New-York Drawing Association, and the Antique School of the National Academy of Design. He was quickly recognized as an exceptional architectural illustrator and his friends such as Morse, Trumbull and Peale advised him towards a career in architecture. From 1826 to 1832, he worked with Ithiel Town, a leading proponent of the Greek-Revival style and one of New York's leading and most socially prominent architects and engineers. It was during this period that Davis became an outstanding architect.

In 1837, he published Rural Residences, the first American book on country house design featuring his hand-painted lithographs which brought him to national attention. From 1839, he partnered with the landscape designer Andrew Jackson Downing to illustrate books such as The Architecture of Country Houses which further worked to popularize his picturesque style that became known as "Hudson River Bracketed". During the 1840s and 1850s, he was the country's pre-eminent architect of the country house, known for the Gothic-Revival and Italianate styles. Among the most important of the 100-or so villas he designed were Lyndhurst and Ericstan. His commissions stretched far beyond New York and aside from exteriors he sometimes designed interiors (eg. at Whitby) and furniture. In the late 1850s, he worked closely with Llewellyn S. Haskell to create Llewellyn Park in West Orange, New Jersey, one of the earliest planned suburbs in America.

The Civil War brought an abrupt end to building for pleasure and by the time business picked up fashions had changed towards the Second Empire style and Davis refused to follow. In 1853, he married Margaret Beale and they were the parents of two children, Flora and Joseph. The family home, "Wildmont," that he built at Llewellyn Park in New Jersey was struck several times by lightning before burning down in 1886 and destroying with it many of his drawings, plans and letters. He died six years later at his son's cottage.

Aspirations for Excellence: Alexander Jackson Davis and the First Campus Plan for the University of Michigan, 1838 By Juliet M. Truettner