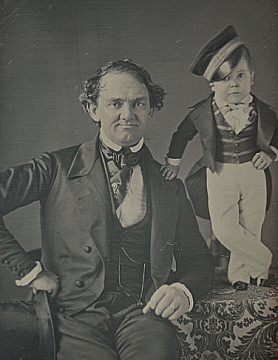 He was born in Bethel, Connecticut. His father died when he was sixteen and he had to borrow money to buy shoes for the funeral. He took on the family store and was influenced by his late grandfather, Captain Barnum, to run a state-wide lottery. At nineteen, he started a weekly newspaper that lampooned church elders and landed him in jail, but also made him a champion among liberals. He sold the store in 1834 and the following year purchased/leased Joice Heth, a blind, paralyzed black woman purported to be George Washington's nurse and 161-years old. She died in 1836 and he started "Barnum's Grand Scientific and Musical Theater" that failed with the Panic of 1837. In 1841, he purchased Scudder's American Museum on Broadway in New York City. He improved the building, added exhibits and renamed it "Barnum's American Museum".

Barnum's quickly became an unmissable tourist attraction with live acts involving wild animals, magicians, jugglers and exotic women; and, curiosities such as albinos, giants, and little people. He built detailed models of cities and famous battles, and offered daily hot air balloon rides above the city. From 1842, he introduced: "The Feejee Mermaid," supposed to be half monkey, half fish; General Tom Thumb, in reality a 4-year old old trained to imitate famous historic characters; and, the Native American dancer, Fu-Hum-Me. They toured Europe in 1844, performing and meeting Queen Victoria and the Tsar of Russia among others. He used the profits to buy up other museums, notably Rembrandt Peale's in Philadelphia and by 1846 Barnum's Museum was attracting 400,000 visitors a year. In the same year, he started the construction of Iranistan, his fantastical home in rural Connecticut Far-Eastern architecture never before seen on the American continent.

In 1850, he signed the Swedish operatic star Jenny Lind ("the Swedish Nightingale") to improve his public reputation for morality and philanthropy - to huge success. He then turned his attentions towards reversing the public's opinions of theaters as, "dens of evil". He put on family entertainments such as plays, flower shows, dog shows etc.; opened the nation's first theatrical matinées; started the pictorial weekly newspaper Illustrated News; wrote his autobiography which Mark Twain loved, selling over a million copies; and, having becoming teetotal promoted temperance. He also began to invest heavily in the development of Bridgeport, Connecticut, but this led him to bankruptcy in 1856. Moralists such as Ralph Waldo Emerson saw his downfall as, "the gods visible again". But, Tom Thumb offered to join him on a European tour before doing a lecture tour in the U.S. so that just four years later he was able to buy back his museum and build Lindencroft.

Barnum's museum was now spread over four buildings and claimed to have 850,000 "curiosities". He developed America's first aquarium and "Seven Grand Salons" displayed the Seven Wonders of the World. In 1862, he visited Abraham Lincoln at the White House with Commodore Nutt (the new Tom Thumb) and a giantess named Anna Swan. As a diversion to the Civil War the museum's popularity increased. Showing his support for the Union, Barnum added pro-Union plays, lectures and exhibits as well as hiring the actress Pauline Cushman who had served as a Union spy to talk about her "thrilling adventures" behind enemy lines. Tragedy struck first in 1865 when a fire destroyed museum. Barnum re-located to the old Coster Mansion but tragedy struck again in 1868 when it too burned to the ground. Barnum retired from the museum business altogether.

In 1870, he established what was first called "P.T. Barnum's Grand Travelling Museum, Menagerie, Caravan & Hippodrome" which continued under a variety of different names - perhaps most famously "P.T. Barnum's Greatest Show on Earth" - until it merged from 1888 to become the Barnum & Bailey Circus which toured the world by train.

Barnum's detractors called him "The Prince of Humbugs" for the hoaxes he created, eg. the "Feejee Mermaid". But, he defended his actions on the premise that they were illusional promotions created to draw crowds to the main show that he insisted must provide value for the money. He was however scathing of those who made money through fraud, eg. the spiritualist mediums who preyed on those in grief and pain, and he frequently exposed the tricks of their trade. Politically, he served four terms as Fairfield's Representative and was Mayor of Bridgeport. He found politics "distasteful" but was determined to see significant changes made on attitudes to race, slavery, and sectionalism. He admitted to owning and whipping slaves when he lived in the south for which he said, "I ought to have been whipped a thousand times for this myself". He declared, "a human soul, 'that God has created and Christ died for,' is not to be trifled with. It may tenant the body of a Chinaman, a Turk, an Arab or a Hottentot - it is still an immortal spirit".

He was married in 1829 to Charity, daughter of Benjamin Wright Hallett, of Fairfield, Connecticut. They were the parents of four daughters, three of whom (listed above) survived to adulthood. It was a happy marriage and he was devoted to his wife, yet he did not attend her funeral. After she died, he travelled to England to be with his old friend John Fish whose daughter, Nancy (1850-1888), was forty years his junior. Three months later, Barnum and Nancy were married. Despite everything, his second marriage was also a happy one and his daughters were devoted to their new stepmother, despite being significantly older than her! Barnum built all his homes at Bridgeport: the fantastical Iranistan; the elegant Lindencroft; the sprawling Waldemere; and the practical Marina.

Battle for the Big Top: P.T. Barnum, James Bailey, John Ringling, and the Death-Defying Saga of the American Circus By Les Standiford

Barnum's Own Story: The Autobiography of P. T. Barnum By P.T. Barnum