Built in 1885, for Mrs (May Williamson) George Pendleton Bowler. Overlooking Frenchman's Bay, it was designed in the shingle style by Rotch & Tilden who three years before had built Chatwold for May and her sister, Mrs Robert B. Bowler. On completion May leased Devilstone to William Henry Vanderbilt who spent a large part of his last summer here with his family. Two years later (1887), the widowed Mrs Vanderbilt was described as leasing Devilstone "as usual," but by 1890 it had been purchased by James T. Woodward of New York. He divided his summers between here and Newport until 1898 when he purchased the historic Belair Mansion in Maryland....
zoom_in 3 images 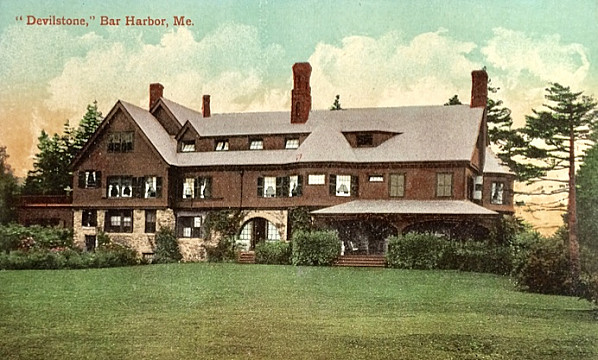 Clement B. Newbold, of Philadelphia

The new owner was Mrs Thomas A. Scott, the widow of the 4th President of the Pennsylvania Railroad and mother-in-law of the well-known Mrs Helen Scott of Ardrossan upon whom the character Tracy Lord was modelled in "The Philadelphia Story" and the musical "High Society". Mrs Thomas Scott died in the same year (1901) that she commissioned Frederick L. Savage to build a two-story, Tudor-style extension for her daughter and son-in-law (Mr and Mrs Clement B. Newbold) containing a spacious library and further bedrooms. Mrs Newbold only survived her mother by another four years, but her husband and their children continued to summer here up until 1928.

The Newbolds sold up to Miss Frances Coleman who immediately added a new wing and not liking its name changed it to "Eaglestone". She divided her time between here and New York and was joined in the summers by her sisters, Mme Etienne de Hedry and the Viscountess d'Alte. She died here in 1967. Except for the new wing which she added - all that remains today - the rest of the house was demolished the following year.

The Coast of Maine By Carl Heilman II

The Bar Harbor Retirement Home for Famous Writers (And Their Muses): A Novel By Terri-Lynne DeFino