Built in 1740, for Samuel Ogle (1694-1752), Colonial Governor of Maryland, and his considerably younger wife, Ann Tasker (1723-1817). The house stood at the center of their 7,000-acre plantation and on completion it was considered to be, "the grandest in the region". In 1747, Ogle introduced thoroughbred racing to America when he brought two thoroughbred racehorses over with him from England. Belair's prominence as a stud farm resurfaced between the 1920s and the 1950s when the Belair Stables were considered arguably the most famous in America under the ownership of the Woodwards. Belair's last private owner was famously shot at Sunken Orchard on Long Island. Today, the mansion and its stables are both open to the public, operated as museums....
zoom_in 3 images 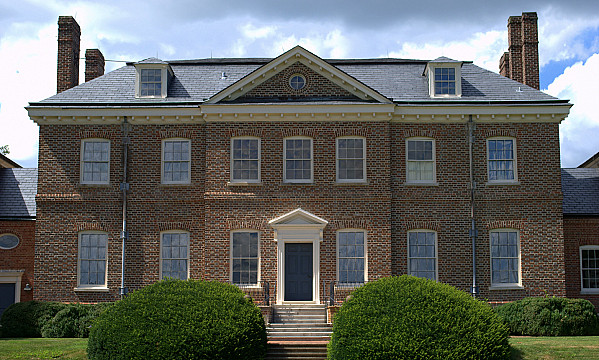 Benjamin Ogle, of Belair; Governor of the State of Maryland

Samuel and Ann Ogle divided their time between here and their townhouse in Annapolis, Ogle Hall. When Samuel died, it passed to their only surviving son, Benjamin, when he was just three years old. After returning from his education in England he was forced to evict his guardian's daughters (his aunts, the children of Benjamin Tasker) who had taken up residence in his absence. Benjamin Ogle became the 9th Governor of the State of Maryland in 1798 and was a close friend of George Washington who dined here in 1773. Over an hundred years later, the house was recalled by one of the Ogle children:

Belair was an ideal old Colonial home, built of English brick... spacious rooms, whose walls were covered with paintings from old masters... the entrance to the mansion was an avenue fully a mile long, lined with tulips and poplar trees. At the rear was a long sweep of velvety green, terraced and broken here and there by lovely beds of roses and plants. Beyond was the park, with its huge forest trees, in which deer wandered...

Benjamin's only son, Benjamin Ogle II, did not enter politics but he continued to successfully manage the plantation and the stud farm. He was a, "a well-read, humorous, and most estimable gentleman" and died in 1844 survived by his wife and 13-children. He left the estate to his two youngest sons, George and Richard, who divided it in two: George took one portion which included the house; and, Richard built "Bladen" on the other. Included in the deed of separation was a clause allowing their youngest sister, Rosalie, to maintain a room at Belair, and she chose one measuring 17-by-20-feet on the top floor.

Civil War & the Last of the Ogles

After their father died, George and Richard had to sell 500-acres to cover his debts. By the time the Civil War started, George was already struggling to maintain Belair and by 1867 he had freed all of his 41-slaves. He now pinned his hopes for resurrecting his fortunes on the new railroad. But by 1870, Belair was reduced to 550-acres and the house was in a bad state. George owed $10,000 to family members and foreclosed the following year (1871) to the executors of the recently deceased mortgage holder, his brother-in-law, William Henry Tayloe. It was then purchased for $5,100 by Thomas Munford and George's nephew, Harry Tayloe, who moved all the pictures and portraits into Mount Airy where they remain.

Despite now having past out of the Ogle family, the clause to the deed that allowed Rosalie to maintain a room still stood - and she stayed! The new owners lived elsewhere and had no need for the house and so their tenant farmers moved in with her. Rosalie took gross objection to this and took the owners to court stating that she could not be expected to share a house with those below her own social station! The courts awarded her a cash settlement and so the last of the Ogles of Belair decamped for a townhouse in Baltimore.

In 1877, Munford and Tayloe sold the plantation for $17,000 to Edward T. Rutter. Over the next twenty years the house was neglected as the land was swapped and sold over the next few years. By 1898, the plantation was reduced to 371-acres when Benjamin N. Hardisty sold it for $3,714 to James T. Woodward (1837-1910), a native of Anne Arundel County and an avid huntsman who'd made a fortune in New York through textiles and ultimately as President of the Hanover National Bank etc. He immediately invested the necessary funds into restoring the mansion and added a wing. Among the first of those to receive invitations to the newly renovated home were the descendants of Samuel and Ann Ogle.

James was a lifelong bachelor and when he died in 1910 he left his fortune and all three of his properties to his nephew, William Woodward Sr. (1876-1973), who succeeded him as President of the Hanover National Bank. In 1914, William commissioned the architects Delano & Aldrich to remove his uncle's ungainly wing from Belair before adding a pair of  symmetrical, Georgian-style wings connected to the main house, increasing its size to 26-rooms. He also expanded the dilapidated estate until it was comprised of 2,280-acres.

The Belair Stud under the Woodwards

William had been introduced to thoroughbred racing in England at the turn of the century while he was secretary to U.S. Ambassador Joseph Hodges Choate. At Belair, he now combined his passion, funds, and ambition to resurrect the Belair Stud. Together with his trainer "Sunny Jim" Fitzsimmons, from the 1920s up until the 1950s they created arguably the most famous racings stables in the United States. Their greatest achievement was realized in 1930 and again in 1935 when Gallant Fox and then Omaha won the U.S. Triple Crown of Thoroughbred Racing - the only father-and-son horses to ever achieve that, a feat which is only matched by one other stable. Woodward was also part of the syndicate who purchased Sir Gallahad III in France and brought him to the States.

William Woodward died in 1953 when the Belair Stud was continued by his equally passionate son, William 'Billy' Woodward Jr. But, just two years later, Billy was shot dead by his wife at his home on Long Island - Sunken Orchard - in a scandal that rocked society to its core and has elicited three books offering different versions of events. Billy's death spelled the end for the Belair Stud. After its stock was sold off, Fitzsimmons left for the Wheatley Stable, then owned by Gladys Mills Phipps "The First Lady of the Turf" and her brother, Ogden Livingston Mills, who owned and bred the legendary Seabiscuit.

In 1957, Belair was bought at auction for $1,750,000 by real estate developers Levitt & Sons. The mansion and stables were converted into their offices while they built the suburban housing development now known as "Belair at Bowie." In 1964, Levitt sold the mansion and 5.6 acres (which included the old Ogle cemetery) to the City of Bowie on the condition that it benefitted the community. Included in the sale - for a nominal $1 - was the 45-acres of parkland adjacent to the mansion which is now the public Foxhill Park.

Belair served as the Bowie City Hall until 1980, when the city outgrew it and a new city hall was needed. Belair was then left derelict and rapidly fell into a poor state of repair. In 1981, a vast renovation project commenced, funded by the City of Bowie, the Maryland Historical Trust, and the Friends of Belair Estate. Since 1996, the mansion house and the stables have been open to the public, operated as separate museums.

The Most Glorious Crown: The Story of America's Triple Crown Thoroughbreds from Sir Barton to American Pharoah By Marvin Drager & Ed McNamara

This Crazy Thing Called Love: The Golden World and Fatal Marriage of Ann and Billy Woodward By Susan Braudy