Completed in 1913, for Col. Robert Leaming Montgomery (1879-1949) and his wife (and second cousin) Charlotte Hope Binney Tyler (1881-1970), their mansion epitomized the grandeur of the "Main Line" during the Gilded Age and beyond. Ardrossan is perhaps best known today as the home of their charismatic daughter, Hope Scott (1904-1995), who was referred to by Vanity Fair as, "the unofficial queen of Philadelphia's WASP oligarchy". She was the inspiration for the lead female role in both The Philadelphia Story (1940) and High Society (1956). The house (confusingly known as "Albemarle"), converted stables, and 17-acres are currently on the market for $25m....
zoom_in 5 images 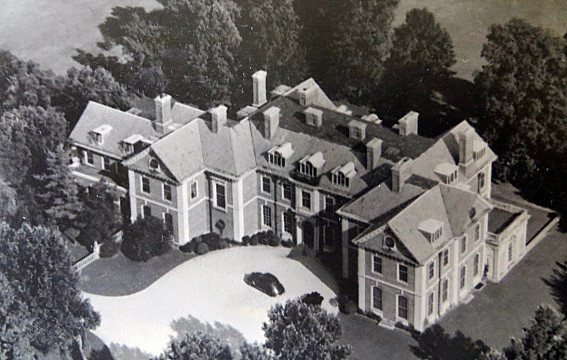 President of the Academy of Music & the Philadelphia Museum of Art

Colonel Montgomery and his wife shared a great-grandfather in Horace Binney (1780-1875), the distinguished lawyer who founded Harvard's Hasty Pudding Club. The Colonel came from a family whose fortunes had waned over the years and in his own words, he grew up in, "shabby gentility". After serving in the Spanish–American War, he took it upon himself to replenish the family coffers and embarked on a financial career that by the age of thirty-two allowed him to the build this mansion.

In 1929, the now legendary financier joined up with his son and son-in-law to co-found the investment firm of Montgomery, Scott & Co., of Philadelphia - today known as Janney Montgomery Scott. At Ardrossan, however, the wily financier was a conservationist and dairy farmer with a prized herd of Ayrshire Cattle; he kept a pack of hounds and hunted foxes with the Radnor Hunt, founded by his uncle, Horace Binney Montgomery; and, in later life he developed a passion for aviation, helping to pioneer the autogyro.

He began purchasing neighbouring farms within the Main Line from 1902 until he owned some 800-acres of fertile, rolling farmland in his native Radnor Township. He named his estate "Ardrossan" for a Scottish one connected to the Montgomerys of Ayrshire.

In 1911, work began on the three story, 50-room Georgian-Revival mansion that covers 38,000 square feet of living space. Built over a two year period, it was designed by Horace Trumbauer (1868-1938), known for creating Whitemarsh Hall among others. The mansion was partially inspired by Ardenrun Place in England, then recently completed by Ernest Newton (1856-1922) for the Anglo-American banker Hans König (1870-1949).

The estate contains no less than 28 separate structures, including a stone clock tower, guest cottages and a building that dates back to 1689 - the birthplace of the mother of General Anthony Wayne (1745-1796). All the Montgomerys adored horses and were skilled equestrians and this passion is reflected by the number of stables, barns and events in the Devon region staged at Ardrossan. The gardens are landscaped with terraces and paths, and the overall view from the house is one of pastoral serenity.

No expense was spared on the mansion that is also confusingly sometimes referred to as"Albemarle". Its 13-foot ceilings stood a foot taller than its Main Line contemporaries and its elegantly sculpted interiors were designed by White, Allom & Co., perhaps most famously known for their work at Buckingham Palace, no less! Some original panelling and wood carvings by the British-Dutch Royal sculptor, Grinling Gibbons (1648-1721), was incorporated into the house which is assumed to have been taken from another English mansion, Holme Lacy House in Herefordshire.

The Montgomerys moved in at the end of 1912 and began to fill their new home with art and antiques, such as the pair of 8-foot long Chippendale sofas. Mrs Montgomery whiled away many hours in the library doing needlepoint and many of her tapestries and embroideries are evident throughout the house. Their walls were decorated with works by the likes of Renoir and Manet, Charles Morris Young (1869–1964), and the Scott's celebrated relation, Mary Stevenson Cassatt (1844-1926).

"This House Loves a Party"

The house was specifically built with a mind towards entertaining on a grand scale, and the family did not disappoint with guest lists that included European aristocracy, Cole Porter and even Katharine Hepburn herself. Recalling life at Ardrossan in the 1920s, Hope Scott told The Philadelphia Inquirer: "Everybody had so much more money (then) - there were so few taxes you see... People gave grand dinner parties and dances; women wore wonderful dresses and men came in fine evening clothes. Usually there would be two orchestras... and we ate divine food like terrapin and champagne, oh, but we had fun!"

Hope's younger sister, Mary Binney Montgomery (1907-1995), was a talented pianist who gave her first concert in Carnegie Hall aged 19. The grand piano in the ballroom was given to Mary by Leopold Anthony Stokowski (1882-1977), whose marriage proposals she turned down on two occasions. In a bid to see the family and their guests through Prohibition, the Colonel stockpiled Ardrossan's four cellars with enough champagne to last 40-years, backed up by a decent supply of wine and spirits - his study became known as the "cigar and brandy room". The dining room comfortably sits 30 guests, though at Thanksgiving in 2004, 98-members of the family were seated for dinner. However, in recent decades, Ardrossan has become more used to hosting charity fund-raisers than extravagant parties.

In its heyday, the domestic staff counted sixteen in number and included three chauffeurs, three footmen, one butler, Irish housemaids, and a French governess for the Montgomery children. The servants quarters included a butler's pantry, kitchen and dining room - where in 1952 the first television set appeared in the house after Mrs Montgomery bought one for the staff so that they could watch the coronation of Queen Elizabeth II.

On the Colonel's death in 1949, Ardrossan was left in trust in equal parts between his four children. Mrs Montgomery remained in the house but it was the Scotts who took up management of the estate and its working farm. In 1923, having refused proposals from four previous suitors, Helen Hope Montgomery (1904-1995) married Edgar Thomson Scott (1899-1995). As a wedding present, her father gave the young couple Orchard Lodge, a house on the estate built in 1720, and a herd of 300 Ayrshire Cattle - to each of whom Hope gave a name. Edgar Scott was the grandson of the 4th President of the Pennsylvania Railroad and after having tried his hand at writing, he purchased a seat on the New York Stock Exchange for $300,000 and went into business with his father-in-law.

Edgar Scott met Philip James Quinn Barry (1896-1949) while studying together at Harvard. Barry was a close family friend and godfather to the Scott's second son. Mrs Hope Scott was his inspiration for the character "Tracy Lord" played by Katharine Hepburn in his Oscar-winning film, The Philadelphia Story (1940), that was afterwards made into the musical High Society (1956) when Hope's character was portrayed by Grace Kelly. Ardrossan featured prominently in the 1940 film, and according to its sale site:

Hollywood lore has it that when MGM executives visited Ardrossan prior to filming, they were so overwhelmed by the estate's scale and elegance that they deemed it "unbelievable" to the American audience. Thus, the stable sets... were scaled down, to appear similar to smaller quarters in nearby Merion.

Hope's family did not feel her portrayal was directly accurate, but there was no denying that Hope had enjoyed a life unobtainable to most: she danced at Manhattan's El Morocco with the Duke of Windsor ("he was pretty good"); did the Charleston in Paris with Josephine Baker; was photographed by Sir Cecil Beaton; and, ate lunch on the yacht of Aristotle Socrates Onassis (1906-1975) with Sir Winston Churchill.

Mrs Montgomery died at the mansion in 1970 and the Scotts opted to remain at Orchard Lodge. Their son, Robert Montgomery Scott (1929-2005), President of the Academy of Music and afterwards the Philadelphia Museum of Art, now assumed residency.

Until the death of his parents, everything at Albemarle was left as his grandmother had kept it, but to the estate itself Bobby - as he was known - kept in pace with the times and made many improvements. In 1995, according to Smith Reports, he employed Eberlein Design Consultants to create a private apartment on the third floor for his personal use that evolved into a restoration project that would take in each of the mansions rooms, as well as stabilizing the exterior. While his apartment reflected his own tastes, the first floor rooms retained their original grandeur and any antiques added were brought out of storage rather than purchased anew.

Since 1970, the estate has been reduced in size and Radnor's last working farm now comprises just 350-acres - though it is still the largest slice of undeveloped land in the township. Two years after Bobby's death, his nephew, Edgar Scott III, put Albemarle and 17 of its surrounding acres on the market while the remaining land stands to be sold to developers. In an interview, the interior designer Susan Penn Gutfreund, who lives on the Ardrossan estate, told the Boston Magazine:

Hope made you feel like you’d known her forever. I remember coming from New York to dinner at Ardrossan with Bob Scott, each time I vividly remember walking out the door after dinner, looking at the trees and the quality of the air and the birds, thinking it was nothing short of a paradise and wishing that one day I didn’t have to leave. You feel at Ardrossan that people have had an awfully good time. There’s not a time I walk in there that I don’t feel the history. Rain, snow, I’ve been there when it was solid white with icicles, and it was magical. The mood is constant.

A book detailing the rich history of Ardrossan is soon to be released, illustrated by photographer David Crane and written by David Nelson Wren, who contributes regularly to Main Line Today.

The Beneficiary: Fortune, Misfortune, and the Story of My Father By Janny Scott