Remodelled in 1892, for the King of Ketchup, Henry J. Heinz (1844-1919), and his wife Sallie Young (1843-1894). Heinz was a refreshing antidote to every "robber baron". His 37-room chateau-style mansion was situated on Penn Avenue between North Lang Avenue and Murtland, next door to industrialist Henry Clay Frick and near the likes of inventor George Westinghouse etc. His name and products remain as universally popular as ever, but his home did not fare so well and was dismantled in 1924, just five years after his death. But, in the best tradition of scraping the last from the bottle, the developer recycled the materials to construct "four or five" new houses....
zoom_in 4 images 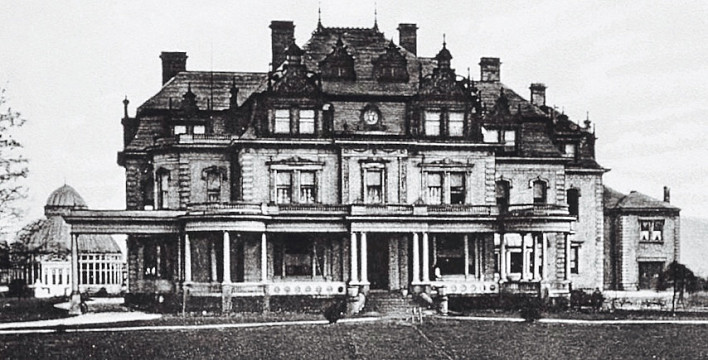 H.J. Heinz was the quintessential entrepreneur. He was an irrepressible optimist, an expert in positive PR, the first global marketeer, and as a manufacturer and employer he consistently set new standards of excellence. He treated his employees - that he referred to as "the Heinz family" - to better conditions than they could have dreamed of at home: sparkling locker rooms with clean running water; roof gardens to relax and eat lunch in; freshly laundered clothes to wear everyday; weekly manicures for anyone handling food; dental care; a monthly newsletter; music recitals; social clubs; and, of course, the annual family-day picnic. By employing chemists, he is also credited with creating the "quality control department" and encouraged consumers to come and tour his factory.

An integral part of the factory tour was what Heinz referred to as, "the house where it all began," his former home in Sharpsburg which he had rolled down to the Allegheny and then floated to the north side of the factory as a reminder of his humble beginnings and what could be achieved with the right attitude. By 1892, his success had allowed him to buy the old Hopkins house for $35,000 which dated back to 1824, the same year in which Hopkins built Trinity Church. Heinz then employed Frederick J. Osterling (who had just finished remodelling Clayton) to expand the old Italianate home, giving it a French makeover - a combination of the Francois I and Classical wings of the Chateau de Blois.

Below the roofline, the house was given a classical facelift in white stone and wide verandahs were added. The mosaic floor in the vestibule displayed Heinz' monogram ("HJH") and each of the seven bedrooms were given their own bathrooms. Heinz travelled extensively for both business and pleasure, and while doing so he added a number of antiques, artefacts and objets d'art to his collection at Greenlawn so that it soon swelled to over 5,000-pieces and required him to hire a curator! Aside from art, he had a particular interest in old watches, a collection of shoes from around the world, a profusion of armor, ivory carvings, antique pottery, oriental rugs and medieval tapestries; and, ever public-spirited, he enjoyed displaying paintings from his own collection in the factory for his workers, and on Sundays opened his private museum on the third floor to the public.

By the time Heinz had finished expanding Greenlawn it included a billiard room, library, and bowling alley. It was run by a household staff of seventeen of which the cook plus four housekeepers and maids not only lived in the house, but were allowed to do so with their families. The butler, head gardeners, and two chauffeurs lived with their families in apartments in the immaculately maintained grounds which included the stables, garage, and a tennis court but were dominated by the spectacular domed conservatory inspired by the Phipps Conservatory. It was centered by a pool in which goldfish swam and from there it led on to a further nine greenhouses brimming over with tropical plants.

Heinz enjoyed experimenting with varietals, but of course he opened his gardens to the public too and his fall chrysanthemum show was a seasonal highlight in Pittsburgh. Just as he collected curios for his museum, he collected specimens for his gardens too, and the grounds at Greenlawn included trees taken from cuts at the Vatican Gardens in Rome.

In 1919, as the Heinz Company celebrated its 50th Anniversary, its inspirational founder died at Greenlawn. His beloved wife, Sallie, had predeceased him in 1894 and afterwards his sisters, Mary and Hettie, had joined him in the house to run the household and play hostess for his business parties. His collection of curios outgrew even Greenlawn's lofty rooms and eventually spilled over to fill several rooms in the Carnegie Institute.

The four Heinz children placed the house on the market but there were no takers. They offered it to the City of Pittsburgh but as their gift did not include an endowment for its running costs, the offer was politely declined. In 1924, on its 100th birthday, the house was sold to real estate developer John S. Parucker who announced his decision to dismantle the house that same year, using the materials to build "four or five" new houses. The land was retained by the Heinz family and developed, but two outbuildings - the carriage house and an extension to his museum - are now homes and can still be found on a small residential street in North Point Breeze. Otherwise, all that remains of the estate is the stone wall along Penn Avenue, topped by its ornate wrought-iron fence.

Pittsburgh Food Crawls: Touring the Neighborhoods One Bite and Libation at a Time By Shannon Daly

Allegheny City: A History of Pittsburgh's North Side By Dan Rooney & Carol Peterson

The Steel City Garden: Creating a One-of-a-Kind Garden in Black and Gold By Doug Oster