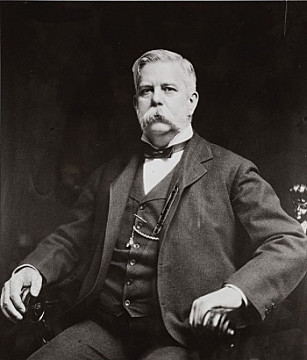 He was born in Central Bridge, New York. He left school at 14 to work in his father's commercial machine manufacturing company. He served with the Union Army during the Civil War, first in the Infantry and then as an assistant engineer in the Navy. He came to Pittsburgh for its superior steel and in 1868 invented the air brake for rail-cars, founding the Westinghouse Air Brake Company in 1869. His work to improve railroad signalling devices and his belief in A/C electricity led to the founding of the Westinghouse Electric Company in 1886. His inventions were pivotal in the advancement of rail travel and he is also the man responsible for America's electrics being run on alternating current (A/C), having gone head-to-head with Thomas Edison who favored direct current (D/C). He won the contracts to supply the electrical dynamos for both the Metropolitan Railway in London and the Paris Metro. By the time of his death, he held 361-patents, owned 59-companies worth $120 million, and employed 50,000 people.

He lived between Solitude in Pittsburgh and the Blaine Mansion in Washington D.C. (where he entertained political and industrial guests) while summering at Erskine Park in the Berkshires. He was a devoted husband and his wife, Marguerite, epitomized the expression, "behind every great man is a great woman". They had just one son, George.

Empires of Light: Edison, Tesla, Westinghouse, and the Race to Electrify the World By Jill Jonnes